When the Jaguar F-Type Convertible burst onto the scene as a 2014 model. it proved to scores of performance enthusiasts that the British brand had once again found its sports car mojo after years of wandering in the GT woods. Further confirmation of the spring in Jaguar's step arrived the following year with the fixed-roof version of the same vehicle, a model whose striking design gave it an exotic look many multiples of its window sticker.

There was one thing missing from the F-Type mix, however, that it took until the 2016 edition to address: a manual transmission. Once the default badge of honor of any self-respecting sports car, the shift-it-yourself gearbox has become more affectation than necessity, but still speaks to droves of enthusiasts seeking a more direct connection with their high performance experience. Jaguar has also decided to take its conquest of America's northern territories one step further with the inclusion of all-wheel drive on both the Convertible and coupe's equipment list. These, plus a handful of smaller, but still important changes to the F-Type, serve to create an even more compelling reason to switch high performance allegiance to the snarling kitty.

The introduction of a manual transmission and a (sometimes) optional all-wheel drive feature, plus the disappearance of last year's V8 S convertible have muddied the order sheet waters somewhat, but you can still divide the 2016 Jaguar F-TYPE lineup along engine choice lines, with base, S, and R models each offering a distinct lump under the hood. The entry-level Coupe (MSRP $65,000) and Convertible (MSRP $68,100) each offer a 6MT gearbox, a supercharged V-6, and roughly the same features as the year before, which include Bluetooth connectivity, 18-inch wheels, HID headlights, automatic climate control, leather seats, and a touchscreen navigation and infotainment system. Jaguar has upped the standard equipment quotient for 2016 to include the previously-optional Meridian surround sound audio system, keyless entry, 14-way power seats, a glass roof for the coupe, and satellite radio.

Moving up to the S Coupe (MSRP $77,300) and S Convertible (MSRP $80,400) nets you additional horsepower from the same supercharged engine, larger 19-inch wheels, a limited-slip rear differential, an adaptive suspension system, and for 2016 the inclusion of a flat-bottom steering wheel, the 'active' sport exhaust, and dynamic driving modes that were previously optional. S models also qualify for all-wheel drive, and although adding this feature requires the move to an automatic transmission it also brings with it a fresh-for-2016 body kit.

The top-tier R Coupe (MSRP $103,600) and R Convertible (MSRP $106,450) see the biggest change for the current model year, as each now comes standard with all-wheel drive. The R Convertible model replaces last year's V8 S with a more powerful eight-cylinder supercharged engine, shared with the R Coupe (which further gains a power tailgate), and the same AWD aero package found on the F-TYPE S AWD is included free of charge. A torque-vectoring rear differential, heated seats, and carbon fiber-look interior trim are also on-hand in R editions of the car.

I've already spilled a thousand gallons of digital ink on why the F-Type coupe and convertible are two of the most beautiful automobiles available on the market today. 2016 maintains the status quo, which is an impressive feat: it's not easy for a design to remain so intoxicating several years after its introduction. Suffice it to say that the menacing, muscular lines of the coupe are not at all diminished by the removal of its roof for the convertible model, and I would personally be hard pressed to select which one I'd want to park in my own driveway on a permanent basis. Jaguar has also created a pair of well-appointed cabins for both its fixed-roof and topless F-Type models, with an abundance of leather, a straightforward gauge package, and a cockpit-like feel for the cabin that is befitting a high end sports car.

The additional power adjustments offered by the 2016 Jaguar F-Type's seats are welcome, as they include inflatable side bolsters to help cement your torso in place on the track. In regular driving I found them a bit too tight to use, which was fine because they deflate at the touch of a button. While the F-Type's raucous soundtrack is one of its best features (more on that later), rolling up the windows in the coupe seals out a significant amount of road noise - in fact, it's almost eerily quiet until you punch the throttle. As for the convertible, well, I have a fairly serious policy about never riding in an open car with the top up, so I can't tell you how many DB's it cuts. I will say that if you plan on regularly road-tripping in your F-Type, you'll want to pick the Jaguar with the hatch rather than the convertible, as there's a lot more trunk space to be had in the latter.

One last note: it's clear that the driver's side foot well was never intended to house a third pedal, as my size-10.5 sneaker kept getting caught between the clutch and the firewall when trying to rest my foot. Maybe I just need more narrow shoes.

The 2016 Jaguar F-Type Coupe and Convertible now come with InControl, which is a system designed to link your smart phone to the automaker's roadside assistance services, climate controls, locking, and Internet applications. Very little discussion of these features was heard during my time at the drive event, and it's easy to see why: using Jaguar's touchscreen interface to access its communications, infotainment, or navigation systems reveals just how old-school the setup really is. A lack of sensitivity and a definite time lag plagued most interactions with the system during my two days behind the wheel, and it remains the only real negative in what is otherwise a well-executed set of controls.

All versions of the 2016 Jaguar F-Type come with dual forward airbags, side impact airbags, and electronic traction control and stability control. If you're looking for additional safety equipmen, you can opt for a blind spot warning system, but that's about it on the active safety front. A rearview camera is also offered with the vehicle, which is helpful given its big haunches (and tiny glass window at the back of the coupe) that makes backing up somewhat difficult.

2016 Jaguar F-Type Coupe and Convertible Crash-Test Ratings: Neither the coupe nor the convertible version of the F-Type have been crash tested by the NHTSA or IIHS.

The 2016 Jaguar F-Type base model coupe and convertible are motivate by a 3.0-liter supercharged V-6 that's good for 340 horsepower and 332 lb-ft of torque. Stepping up to the S edition of either car turns up the boost on the blower to squeeze 380 horses and 339 lb-ft of twist from the same unit. Each of these engines can be had with the choice between a new six-speed manual transmission or an eight-speed automatic. All-wheel drive joins the options list as well for 2016, albeit only for S cars, and it requires the additional selection of the eight-speed autobox.

The F-Type R makes all-wheel drive standard, and it also harmonizes the engine under the hoods of both the coupe and convertible, making them both a 550 horsepower version of Jaguar's ubiquitous 5.0-liter supercharged V-8. This mill also grinds out a hilarious 502 lb-ft of torque, making it one of the most potent sports car drivetrains at its $100k price point.

I'm a big fan of manual transmissions, and each of my own personal rides feature a traditional manual gearbox. Needless to say I was very excited when Jaguar announced a six-speed would be available with the V-6 F-Type for 2016, as I was already enamored of the car in eight-speed automatic form.

Sometimes, it seems, reality never quite lives up to fantasy. Let me explain. Jaguar has done an excellent job working with ZF to produce a six-speed that meshes well with the powerband of its six-cylinder line-up, especially considering that the car was not originally conceived with anything other than an automatic in mind. The throws aren't as short as I would like them to be - it's less 'snick-snick' and more 'up-and-over' - but it's a box befitting a performance car.

Where the 6MT falls short is in delivering the same visceral experience offered by the eight-speed automatic. Jaguar's active exhaust in auto-equipped models offers the most incredible snap, crackle, and pop this side of a Kellogg's box, especially when lifting off throttle. The manual? Not so much. You really, really have to push the throttle hard to benefit from the same aural entertainment that the eight-speed delivers at almost any RPM, which puts a pin through the heroic self-image built up by the F-Type in even the most mundane driving activities. I realize that this is a very personal observation, but given that the manual car is most likely to be purchased by enthusiasts, it's one worth mentioning. Jaguar, please tweak the active exhaust software to turn the fun up to 11 on the next iteration of this drivetrain.

For those who feared that the F-Type R's new standard all-wheel drive system would civilize the car's performance to the point where it was no longer the tire-smoking hooligan it used to be, well, that's what's happened. Let me advance the case that this is no bad thing. On the track at the Monticello Motor Club, I was able to sample the R Coupe's all-wheel drive in both the wet and the dry, and I came away impressed by how the vehicle's torque-vectoring capability allowed me to correct mid-corner by lifting off the throttle. The effect was like someone had switched on a magnetic at the apex, expertly rotating the F-Type rather than sliding the tail across the asphalt.

On the street, the system is imperceptible thanks to Jaguar's decision to tune in a definite rear-wheel bias, and there's absolutely no understeer or scrub when turning in at a high rate of speed in a high performance driving environment (with its only real downside being an almost 200 pound increase in the car's curb weight). Also near-invisible is the F-Type's new electric power steering, as the vehicle has made the evolutionary step away from last year's hydraulically-assisted setup without any rear loss of feel or directness.

The 2016 Jaguar F-Type's new manual transmission, good as it is, might not be the second coming I really hoped it would be, but you know what? It doesn't matter, because you can still get the autobox if you really want it (and strangely, I think I do). Wannabe drifters will definitely be disappointed in the F-Type R's newfound all-wheel drive surefootedness, but anyone who lives in the real world will instantly appreciate the extra wet-weather traction and on-track pliability of the system. Ultimately, we should all be grateful that there's at least one sports car builder out there that's expanding, rather than shrinking, its high performance showroom presence.

Jaguar USA supplied the vehicle for this review. 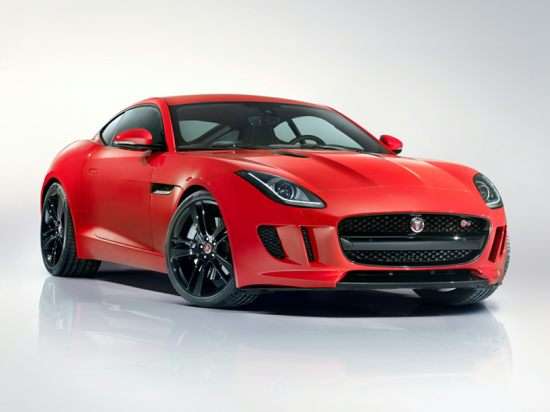