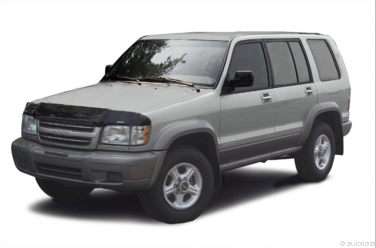 All About Isuzu Trooper

The Isuzu Trooper was first introduced in 1981. This first generation model ran for ten years before the second generation arrived in 1992. These very early models were offered as two- and four-door models. It was the latter that helped build the Trooper name. At a time when SUVs were still a rarity, the Trooper did quite well. This was the functional style SUV not the luxury models that the public eventually came to crave. One of the weaknesses of the early models was the lack of power. Under the hood was only a 2.2 L engine. Eventually a V6 was added as well as a few luxuries to keep the consumers happy. Still the vehicle needed a major redesign to stay competitive.

This second generation came out in 1991 with base S and the luxury LS trims. Instead of the chunky square edges there was now larger rounded corners. The base model had a 3.2 L V6 engine offering 175 horsepower. The LS had a twin cam engine offering 190 horsepower. Standard at the time was antilock brakes. The LS had the option of four-wheel ABS brakes. All Troopers had a five-speed manual transmission with a four-speed automatic available as an option.

By 1993, there was a two-door RS wagon with similar equipment to the four-door LS. Four-wheel antilock braking was available for the S and RS models by 1994. Airbags were added in 1995 and the two-door wagon disappeared as fast as it had appeared. Now all models were four-door. A new 4WD shifting system was added in and all models had single-cam V6 engines producing 190 horsepower. The only change in 1997 was that antilock braking became standard across all Troopers. In 1998 a bigger engine was added in. The new V6 was a 3.2 L engine that offered 25 more horsepower. The other important change was a full-time 4WD system called Torque-On-Demand. In 2000, rear wheel drive models were available and new grille, taillights and automatic climate control became standard. In 2001 the biggest change was the release of the Anniversary Edition to celebrate Isuzu’s 85th year. The Trooper was discontinued in 2002.

In the government crash tests, the Isuzu Trooper received a four star rating for the driver and front passenger in the front impact crash tests.