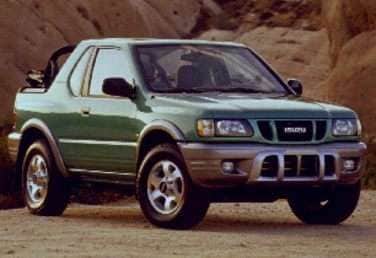 All About Isuzu Amigo

The very first Isuzu Amigo was introduced to the US market in late of 1989 as a 1990 model. This first model was a compact sport utility vehicle that was heavy on the ‘sport.' This first generation went through to 1994 and was available as a convertible model only. There were two trims – the S and the XS. There were two-wheel drive or on-demand four-wheel drive models that offered two engine choices. The two engines were a 2.3 L inline 4 cylinder engine offering 96 horsepower for the S model and a larger 2.6 L 4 cylinder engine that produced 120 horsepower. The first models came with a manual transmission with the automatic becoming optional toward the end of that year.; Other choices included the number of seats and an open or a closed cargo space. This spunky vehicle had two doors and a tailgate that opened sideways.

In 1991, the Amigo had a slight upgrade to the interior with the addition of a locking center console as standard equipment. In 1992, a four-speed automatic was added as another available option. The year after, there was a new grill and in 1994 the automatic transmission and the base 2.3 L four-cylinder engine was removed. At the same time, a third stop lamp was installed, and power steering, power mirrors, and a central console were standard across the board. The first generation of the vehicle was discontinued after 1994.

The second generation of the Isuzu Amigo was offered from 1998-2000. There was again only a convertible model available with a hardtop variation added in 1999. This model had a body-on-frame construction with a non-independent rear suspension similar to the Isuzu Rodeo. There was one trim available - the S trim.

The exterior of the vehicle was well received but the interior less so. The space is small, has an over abundance of plastic and offers little soundproofing, which lets in too much engine noise. As for drivability, the Isuzu Amigo has excellent handling due to its short wheelbase but with the suspension and steering issues made for a rougher ride.

This generation was powered by two engines again - a 2.2 L four cylinder or a 3.2 L V6 engine. These came in 1998 with a manual transmission and by the next year there was an automatic transmission available.

This vehicle received high marks for its exterior look of sharp angles and sportiness. That it wasn’t as loaded in features as other SUVs wasn’t an issue given the price range. It does come standard with AM/FM/cassette music system, antilock brakes, and for the hardtop – dual sunroofs.