If you need to haul eight passengers in exceptional comfort there’s no longer any need to select a traditional luxury suv to do so, as there now exists panoply of high-end crossovers with three rows of seating that do their best to mimic the dynamics of a large sedan out on the road. If you plan to do any towing, however, or want to haul the entire contents of your living room with you on the next camping trip, then a full-size, truck-based sport-utility vehicle like the 2015 Infiniti QX80 is still a strong choice.

With so few competitors – the Lincoln Navigator, the Cadillac Escalade, and in a broad sense the Land Rover Range Rover Sport and Lexus LX570 all vie for a similar customer – Infiniti would have been forgiven for letting the QX80 march forward with the plodding pace of a soon-to-be-extinct thunder lizard. The Japanese luxury brand has flipped the script on that narrative, however, investing in the QX80 a level of technological prowess and interior refinement that imparts the well-deserved title of ‘flagship’ onto this mammoth beast.

The 2015 Infiniti QX80 comes in two models: rear-wheel (MSRP $63,250) and all-wheel drive ($66,250). Both feature identical levels of standard equipment, including 20-inch rims, LED headlights with automatic high beams, tinted windows, power folding and heated side mirrors, rain-sensitive wipers, running boards, a moonroof, a power liftgate, heated leather seats with power adjustments and a driver’s side memory feature, a 13-speaker audio system, satellite radio, Bluetooth connectivity, power windows and door locks, keyless entry and ignition, three zones of automatic climate control with air filtering, power adjustments for the tilt and telescope functions of the steering wheel, a navigation system, and voice control over most vehicle functions. The all-wheel drive model also has exclusive access to Infiniti’s poshest version of the QX80, which is marketed as the Limited package and which installs an even higher standard of leather, an ‘Ultrasuede’ headliner, upgraded cabin wood, and unique exterior trim.

There are no shrinking violets in the full-size luxury SUV world, and the 2015 Infiniti QX80 assumes the title of ‘look-at-me’ champion after the Cadillac Escalades recent, more muted redesign. With a blaring, all-new grille, long hood, and portholes on the front fenders, the QX80 demands attention from even the most disinterested passersby, but overall the truck manages to stay just this side of obnoxious. The rear of the vehicle has additionally been resculpted to introduce a touch of grace where there was none before, and wheel options ranging from 20 to 22 inches are now on the table for the Infiniti. Also nice: traditional, and narrow, running boards in place of the suddenly-popular retractable units found on its competitors that are always trying to trip me up as I enter or exit the vehicle.

The QX80’s interior redesign has brought more dramatic changes to the truck’s personality, and I think it’s safe to say that one won’t find a classier cabin in its price range. There’s enough leather and wood crammed into the Infiniti’s passenger compartment to make even a Bentley designer blush, but rather than coming off as crass the QX80’s attention to detail imparts a sensation that one is actually driving a much more expensive truck. It’s not a stretch to say that this SUV possesses the most pleasing accommodations to be found in any Infiniti vehicle.

The 2015 Infiniti QX80 is best sampled in seven-passenger trim, as that allows second row riders to sit in magnificently-appointed captain’s chairs divided by a huge wood-topped center console (a second row bench is a no cost option, and increases total passenger capacity to eight). The mid-buckets in my tester also offered a one-button tumble feature that I could activate from the front of the vehicle, which made it easy to admit occupants to the QX80’s third row. Once back there, however, there was little anyone could do from my driver’s perch to improve on the questionable comfort of the awkwardly-angled seats, which drove my knees to my chest and skimped on leg room.

Better, then, to power-fold the final set of accommodations into the floor and take advantage of the Infiniti’s reams of cargo space instead. Checking in somewhere between the larger Navigator and suddenly-smaller Escalade (at least, in standard-wheelbase form), the QX80 is the perfect big box for carting home all of your big box store purchases. The SUV's 95 cubic feet of interior storage are dwarfed by the long-wheelbase editions of the Lincoln and the Cadillac, however, and there's no similar extended version of the Infiniti available to compensate.

You might have noticed that the 2015 Infiniti QX80 is heavy on the standard equipment, with packages restricted primarily to adding safety features or upgrading interior trim and upholstery. This helps inform the QX80’s value proposition, especially in comparison to European SUVs that typically nickel-and-dime customers at buying time by making them pay an extra fee for must-have luxuries.

Borrowing a page from corporate parent Nissan is the QX80’s easy-to-use navigation/entertainment/climate touchscreen interface, which displays simple menus and reduces the number of steps associated with a given task. If you just want to punch buttons and twirl knobs you can do that too, as Infiniti has resisted the temptation to introduce capacitive touch surfaces to the QX80’s control surfaces – something I was thankful for when I discovered I was able to activate the truck’s heated seats and steering wheel without removing my warm winter gloves.

A few Infiniti quirks can be found in the QX80, including flat buttons located on the gauge cowl that are used to reset the trip odometer and adjust the brightness of the vehicle’s interior lighting. The position and feel of these controls have always struck me as distinctly ‘non-premium.’ There’s also the unusually hypnotic, spirograph-style background for the speedometer and the tach, which stands out even more given the lack of driver-focused TFT screens as found in nearly all of the SUV’s competitors.

The 2015 Infiniti QX80 provides buyers with a host of advanced safety equipment, but if you want any of it you’re going to have to pay quite a bit extra. The one glaring hole in the QX80’s list of standard features has to do with active safety gear, as the vehicle includes only a full complement of airbags plus electronic stability control and traction control free of charge.

On the whole Infiniti’s suite of safety gear works well, but there were instances during my time with the QX80 where the protective features actually performed a little ‘too’ vigorously – like the phantom auto-braking I experienced while reversing down an empty street. Then there’s the equipment that no one truly needs, such as Distance Control Assist that adds resistance to the gas pedal to keep you from getting within a certain distance of whatever traffic you are following. It’s an unnatural sensation while behind the wheel, especially given that the system lacks any real situational awareness. In my opinion, a piece of safety technology that you have to actively work around to keep up with the flow of vehicles around you is of no real benefit.

Crash Test Ratings: the new Infiniti QX80 has yet to be crash tested by either the NHTSA or the IIHS.

All 2015 Infiniti QX80 SUVs come with a 5.6-liter V-8 that makes use of variable-valve timing and direct fuel injection to produce 400 horsepower and 413 lb-ft of torque. A seven-speed automatic transmission – one that offers automatic rev-matching on downshifts for reasons that escape me – is standard on the Infiniti, with all-wheel drive representing the only drivetrain option. The all-wheel drive system features auto, high, and low modes to help the truck power through off-road obstacles, and there’s also 8,500 lbs of towing capacity locked up inside the QX80. Fuel mileage for the beast is listed at 14-mpg city and 20-mpg highway, and after driving the SUV in bitterly cold weather I can confirm the lower half of that estimate as accurate.

The 2015 Infiniti QX80 is capable of defying its bulk in certain driving situations and offering a level of handling and acceleration that would at first seem impossible given its sheer mass and nine-plus inches of ground clearance. Thanks to the Hydraulic Body Motion Control system that comes as part of the Deluxe Technology package – a feature that actively controls the SUV’s shock absorbers to reduce lean and wallow in the corners – the QX80 feels remarkably stable at all speeds. It’s certainly not nearly as maneuverable as a large sedan would be, but then again, find me a four-door automobile that can transport eight passengers or tow your boat trailer. I also had no issues dealing with snow-covered roads or icy alleys in the SUV, thanks to the ministrations of its all-wheel drive system (which I kept in auto mode for the duration of the week).

The Infiniti QX80’s mighty V-8 engine proved itself up to the task of hauling around a full load of people, freight, or whatever, and the truck’s aggressive full throttle exhaust tones were pleasantly muted while cruising on the highway at a more sedate rpm. In fact, the cabin is very quiet, even when empty, with none of the booming over bumps that some full-size SUVs experience due to the boxy shape. In my acceleration testing I was able to put down 0-60 numbers that were nearly a full second faster than Infiniti’s published figures, so either its engineers were sandbagging for the sake of modesty or I drove some kind of freak truck with a secret afterburner. Either way, the QX80 feels far quicker than it reasonably should be.

For those who live in an area where dense urban traffic is a fact of life, there’s no getting around the length and breadth of the Infiniti QX80’s massive platform. You’ll need to stay on your toes and make sure the blind spots on either side of the truck haven’t swallowed a Miata or two. More to the point, narrow streets and tight parking lots are a definite issue in this SUV, and you simply won’t fit in the majority of underground parking garages. These limitations are endemic to all full-size, truck-based people movers, which is in part why crossovers have risen in prominence with family shoppers.

It’s hard to beat the 2015 Infiniti QX80’s blending of price and interior elegance as compared to other traditional luxury sport-utilities. The QX80’s cabin is a sight to behold, and its bountiful leather and wood don’t compromise whatsoever on the practicality of its big box shape. Although the Infiniti might seem down on torque when compared to the Lincoln Navigator and the Cadillac Escalade, it feels just as stout when pulling to the redline, and, in the case of the Navigator, significantly more sure-footed on slippery roads.

If your towing or hauling agenda doesn’t require such a hefty, gilded mule, then you might want to take a trip over to crossover country and sample something equally comfortable, yet more pliable for your day-to-day.  On the other hand, if you feel that you need a land yacht as impressively huge as the QX80, and you’re looking to walk a different path from the rest of the herd and save a few bucks in the process, then consider the Infiniti an appealing option.

Nissan Canada supplied the vehicle for this review. 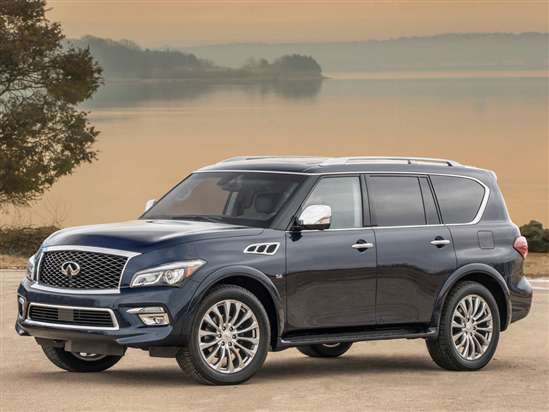