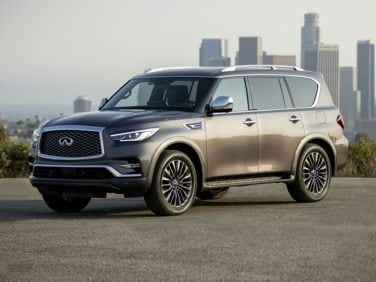 All About Infiniti QX80

The Infiniti QX80 is the Infiniti model formerly known as Infiniti QX56. And, while may possibly see many bits of marketing hype touting the all-new Infiniti QX80, the only thing all new about the model is its name. Going into the 2014 model year, all Infiniti nomenclatures will begin with the letter Q, because a simple alphanumeric nomenclature system wasn’t confusing enough for the Tennessee-based sub-brand of the Japanese car company owned by a French conglomerate.

That said, the Infiniti QX56 now known as the Infiniti QX80, is essentially a Nissan Pathfinder Armada all kitted out for luxo-duty. The QX80 is blessed (depending upon your perspective) with an extraordinarily spacious cabin and very generous exterior dimensions. It’s one of the largest models in its class. It also boasts a smooth and powerful V8 engine, and a supple suspension system capable of delivering both a comfortable ride and significant off road capability. Other hallmarks of the model are its luxurious interior treatments and loads of tech gear.

So, now that we have all of that straight, the Infiniti QX80 is an eight-passenger, rear- or four-wheel drive model powered by a 400-horsepower V8 engine displacing 5.6-liters and producing 413 ft-lbs of torque. A seven-speed automatic transmission is standard equipment.