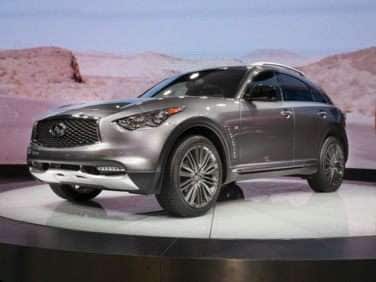 All About Infiniti QX70

The Infiniti QX70 is the Infiniti model formerly known as Infiniti FX. And, while you will see many bits of marketing hype touting the all-new Infiniti QX70, the only thing all-new about the model is its name. Going into the 2014 model year, all Infiniti nomenclatures will begin with the letter Q, because a simple alphanumeric nomenclature system wasn’t confusing enough for the Tennessee-based sub-brand of the Japanese car company owned by a French conglomerate.

OK, we’re kidding—sort of. Seriously though, why the nomenclature changes?

“We are embarking on a massive product offensive, and these new cars will need names. There are no suitable combinations of Alphanumeric naming options remaining, which are not already trademarked by another automaker. In order to expand our line up with the fascinating new models we are developing, we must create a more flexible nomenclature philosophy. Infiniti owns the naming assets of Q plus double digit, and QX plus double digit. And it is a permanent part of our heritage.  So the solution is pretty straightforward - use Q for cars, QX for crossovers, and double digits in increments of ten, to denote hierarchy, linked to the price point of the model, not size and engine displacement.”

Long story short, Infiniti is developing new models and new smaller, but more powerful engines. Going forward, positioning its models based on engine displacement will no longer make sense. It’s a bit confusing now, but eventually it will all make sense.

That said, the Infiniti FX, now known as the Infiniti QX70, is essentially a large Infiniti G37, no, wait, Infiniti Q50 (which is what the G37 shall henceforth be known as) station wagon. The two models use the exact same platform, albeit with a different body. The good news is, like the G37, (Ack! The Q50!!!) The QX70 is blessed with near 50/50 weight distribution, smooth and powerful engines, and a supple suspension system capable of delivering both a comfortable ride and dynamic handling. Other hallmarks of the model are its luxurious interior treatments and loads of tech gear.

Of course, had Infiniti dared refer to the model as a station wagon, sales would have been positively dismal. So they called the FX (now QX70) a crossover SUV instead.  That said, the Infiniti QX70 is a five-passenger, rear- or all-wheel drive model powered by a 325-horsepower V6 engine displacing 3.7-liters and producing 267 ft-lbs of torque in its base configuration. The QX70 can also be ordered with a 390-horsepower 5.0-liter V8, delivering some 369 ft-lbs of torque. All-wheel drive is the only choice with the V8. A seven-speed automatic transmission is standard equipment.