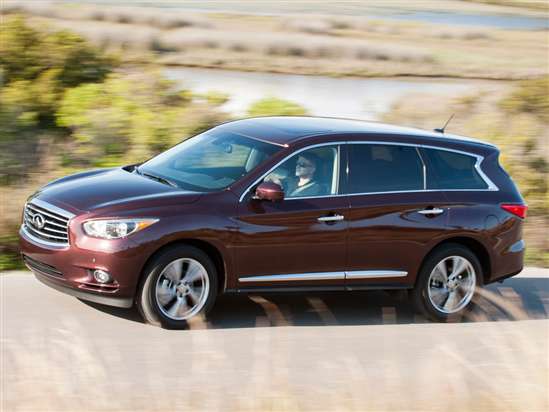 Previously called the JX35, the Infiniti QX60 adds a new hybrid-powered model to the lineup for 2014. An auto-dimming rearview mirror with a universal garage door opener is standard this year, and last year’s Premium Package is now divided into Premium and Premium Plus option packages. The optional Deluxe Touring Package adds third-row seats that power themselves up with the touch of a button.

Infiniti packages the QX60 in a single level of specification with stair-step option packages that add extra equipment. At a minimum, nearly all QX60 models sitting on dealership lots will have the Premium Package (premium audio system, an enhanced Intelligent Key with memory for a driver’s settings, heated power folding side mirrors, driver entry/exit assist). The Premium Plus Package upgrades the QX60 with a navigation system, and is a requirement before adding anything else to the vehicle.

Options for the QX60 Hybrid are packaged in a similar way, though not exactly as discussed above.

The Infiniti QX60 is equipped with a 3.5-liter V-6 engine making 265 horsepower. A supercharged 2.5-liter 4-cylinder engine, a 15-kW electric assist motor, and a lithium-ion battery pack combine to make 250 horsepower in the QX60 Hybrid. Both powertrains feature a continuously variable transmission (CVT) and front-wheel drive. All-wheel drive is optional.

The EPA says the QX60 gets 22 mpg in combined driving with front-wheel drive, and 21 mpg with the optional AWD system. The QX60 Hybrid is rated to return 26 mpg regardless of drivetrain type.

Neither the National Highway Traffic Safety Administration (NHTSA) nor the Insurance Institute for Highway Safety (IIHS) had performed crash tests on the 2014 QX60 as this summary was written. Last year, the IIHS gave the JX35 a “Good” rating for frontal- and side-impact crash protection, while the NHTSA assigned the JX35 a 4-star overall rating, in part due to a 3-star frontal-impact result for the front-seat passenger in a frontal-impact collision.

These ratings could change if the 2014 QX60 is re-tested.

In addition to the expected navigation, premium surround sound, and rear-seat entertainment systems that are optional for the QX60, Infiniti offers a couple of packages containing technology upgrades.