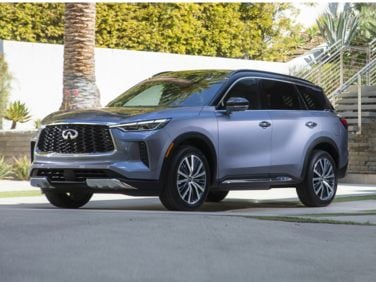 All About Infiniti QX60

The Infiniti QX60 and the Infiniti JX are one and the same, though, as a relatively new addition to the Infiniti lineup, both monikers might be somewhat unfamiliar. Though the Infiniti JX made its debut in 2012 as a 2013 model, it was renamed just the next year as part of Infiniti’s overall renaming scheme, so for the 2014 model year, this Infiniti mid-size luxury vehicle became known as the QX60. The QX60 is assembled in Nissan’s Smyrna, Tennessee production facility in the United States. It is closely related to parent company Nissan’s Pathfinder and Murano sport utility vehicle models.

The QX60 is a seven-passenger crossover that is based on the Nissan Murano platform, though the platform has been elongated somewhat to accommodate the larger body necessary for the extra cabin space that is an important selling feature of the vehicle. Infiniti crammed a lot of luxury features into the interior, so that all seven passengers can ride in comfort. The QX60 offers a Bose audio system with 13 speakers that features MP3 capability as well as a DVD player that plays on two monitors, one mounted inside the back of each of the front seat headrests. The audio can also be streamed via a Bluetooth wireless interface. The third row seat is one way that manufacturers make their crossovers extra desirable to large families, and in the Infiniti QX60, the third row has a 50/50 split to fold down to accommodate extra cargo, and can also recline. Like many other luxury crossovers, safety and technology are priorities for the QX60. The driver has an assortment of helpful features, including a backup collision intervention system that scans for obstacles whenever the vehicle is in reverse, and four cameras that give the driver a composite image of the vehicle’s immediate surroundings.

The QX60 has a front-engine layout and is available in either front-wheel drive or four-wheel drive. The powertrain in the QX60 is a 3.5-liter V6 that produces 265 horsepower. It is paired to a continuously variable transmission. This combination is good for a 0-60 acceleration time of 8.6 seconds. For the 2014 model year, the Infiniti QX60 is also available in a gasoline-electric hybrid model. The hybrid drivetrain is a supercharged 2.5-liter inline-4 that is paired with an electric motor driven by a lithium-ion battery. Specs are similar to that of the gasoline version of the QX60. At the time of the hybrid QX60’s anticipated release, Infiniti claimed that the vehicle achieved best-in-class combined fuel economy.