The Infiniti QX56 is the largest vehicle in the luxury brand's lineup.  This four-door, full-size SUV can seat as many as eight passengers across three rows, and it also offers an astounding 112 cubic feet of total interior cargo space.  The Infiniti QX56's full frame platform also makes it an exceptionally capable - and comfortable - tow vehicle, with a maximum trailer rating of 8,500 lbs.  On the safety front, the QX56 comes standard with electronic stability control and traction control as well as active head restraints, forward airbags, side airbags mounted to the front seats and side curtain airbags that extend along the length of the entire passenger compartment.

The Infiniti QX56 is outfitted exclusively with a 400 horsepower, 5.6-liter V-8 engine that also churns out 413 lb-ft of torque.  This mill is shifted via a seven-speed automatic transmission, and four-wheel drive can be ordered with the SUV.  Fuel mileage for the hefty truck checks in at 14-mpg in city driving and 20-mpg on the highway.

The Infiniti QX56 comes in a single trim level that is quite generously equipped.  The SUV's list of standard gear includes tinted windows, parking sensors, a sunroof, three zones of automatic climate control, adjustable heated leather seats up front, a parking camera system that shows a 360 degree view of the area around the truck, a navigation system, a Bose stereo system, Bluetooth connectivity and satellite radio.

An equally long list of options packages are available with the Infiniti QX56.  The Split Bench Seat package swaps out second row captain's chairs for one more seating position and the Theatre Package adds dual LCD screens so everyone behind the driver can be entertain on longer trips (as well as seat heaters and a 120-volt outlet).  The Deluxe Touring package offers an active suspension system, enormous 22-inch wheels, an air filtration system, a ventilation feature for the front seats, nicer leather and wood trim and surround sound audio, while the Technology package loads up on safety gear: lane departure warning and prevention, adaptive cruise control, intelligent brake assist with forward collision warning and blind spot warning with blind spot intervention. 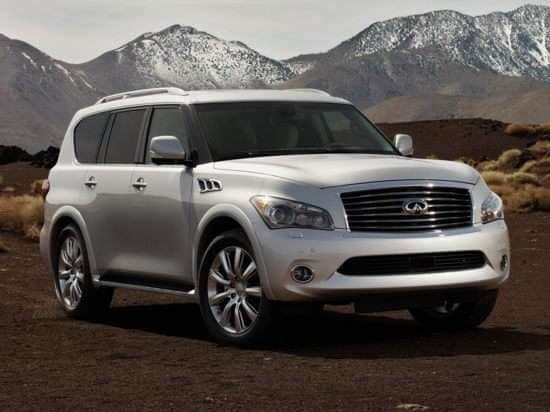