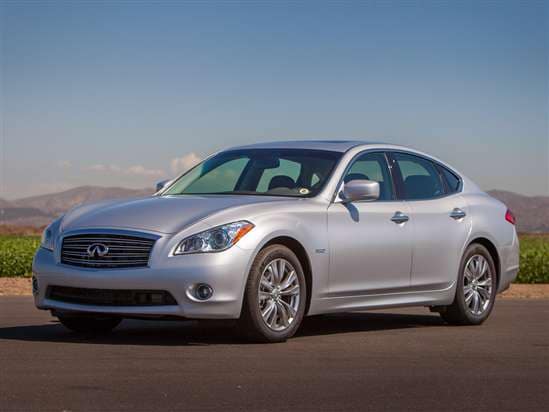 Moving forward, it has been decreed all Infiniti nomenclatures will begin with the letter Q, because a simple alphanumeric nomenclature system wasn’t confusing enough for the Tennessee-based sub-brand of the Japanese car company owned by a French conglomerate.

“We are embarking on a massive product offensive, and these new cars will need names. There are no suitable combinations of Alphanumeric naming options remaining, which are not already trademarked by another automaker. In order to expand our lineup with the fascinating new models we are developing, we must create a more flexible nomenclature philosophy.

With all of that said, the Infiniti Q70h is a mid-size hybrid luxury sedan offered with a powertrain comprised of a 3.5-liter V6 and an electric motor. Combined power output for the powertrain is a highly effective 360 horsepower. A seven-speed automatic transmission handles power routing. The EPA quotes fuel economy for the luxury hybrid sport sedan at 27 miles per gallon in the city, 32 on the highway, and 29 combined.

Powerful, luxurious, and exceptionally well-balanced, Infiniti’s often-overlooked line of luxury sport sedans is a driving enthusiast’s delight. Further, the Q70h is outfitted with first rate materials and attention to detail, while offering a broad array of state of the art comfort, convenience, and tech features. In review after review after review, the Infiniti M cars (now known as the Infiniti Q70) compared highly favorably to their competitors from Mercedes, BMW, Lexus, and Audi.