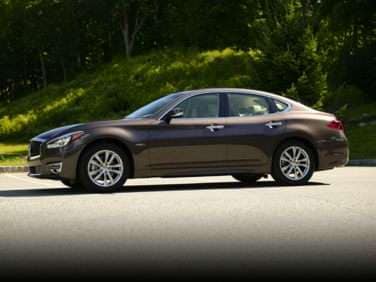 The luxury Infiniti brand of automobiles was introduced by Nissan, the Japanese auto manufacturer, in November of 1989. Infiniti was developed specifically to fuel growth in the North American market, and the brand is now sold in more than 15 countries. Nissan brought the Infiniti brand to its home market of Japan in 2013, although before the brand’s domestic launch, the Japanese market often featured Nissan-branded versions of vehicles that were sold elsewhere under the Infiniti name. For the 2014 model year, Infiniti renamed its popular line of midsize luxury sedans. Once known as the M, the model was reintroduced as the Q70. Casual observers would be hard-pressed to spot many actual changes, though, besides the badging. However, Infiniti managed to squeeze a few more miles per gallon out of the Q70 Hybrid sedan, improving the EPA combined rating from 29 to 31. City mileage is rated at 29, and highway clocks in at 35. This fuel economy earns the Q70 Hybrid a spot among the most fuel efficient vehicles in its class, and the car’s performance doesn’t suffer because of it. It’s actually a bit quicker than the base model V6 version of the Q70. The Q70 Hybrid is powered by a 3.5-liter V6 gasoline engine that is paired to a 50 kW electric motor and a lithium-ion battery pack, a combination that yields 360 horsepower.

The Infiniti Q70 Hybrid, like the rest of the models in the Q70 range, is one of the sportier midsize luxury sedans on the market, even if that’s not readily apparent based on the exterior. The Q70 comes standard with rear-wheel-drive, which is the only available configuration. Handling is a little lacking, however. Even though Infiniti revised the suspension tuning for the 2014 model year, it might be a little stiff for a lot of potential buyers.