The 2015 Infiniti Q70 flagship sedan will launch later this year with new styling, new technologies and even a brand-new model, as Nissan's luxury division looks to turn around a recent spate of weak sales months.

Setting the pace will be the 2015 Infiniti Q70 proper, now wearing a refreshed exterior design inspired by the look of the Infiniti Q50 sport sedan. Perhaps most noticeable is the new exterior illumination package that will be standard on the 2015 Infiniti Q70 and include LED headlamps, taillights, fog lights and mirror-mounted turn-signal indicators. However, the car also gains a more premium appearance from its revised front and rear fascias, while Infiniti colorists are introducing three new exterior finishes. Hermosa Blue, Chestnut Bronze and Graphite Shadow are new to the palette, and a striking Pearl finish will be available as a premium upgrade for the current Moonlight White.

Two more cutting-edge driver assistance features will premiere on the 2015 Infiniti Q70 as well: Predictive Forward Collision Warning and an Around View Monitor with Moving Object Detection; blind-spot, lane-keeping and rear collision-mitigation technologies also remain on the menu, as do a choice of two powerplants, both hooked to a seven-speed automatic with manual-shifting capabilities. The standard motivator is a 3.7-liter V6 with outputs of 330 hp and 270 lb.-ft. of torque, and a premium 5.0-liter V8 can up the ante with 420 horses and 417 lb.-ft. of twisting power.

Stretching an additional 5.9 inches in length as compared to the standard model, the 2015 Infiniti Q70L was designed to combine the performance of a sport sedan with the rear-seat passenger space offered by bulkier crossovers and SUVs. Thus, that extra length grows the Q70 to 202 inches, with 5.6 more inches of rear-seat legroom and 41.8 inches in total; to put that into context, the Chevy Traverse full-size three-row crossover only provides 36.8 inches of legroom for second-row passengers.

The 2015 Infiniti Q70L then adds 5.9 inches of length in the wheelbase, too, to "provide smooth, luxurious ride comfort for all seating positions."

Essentially stepping into the role of full-size luxury sedan for the division, the 2015 Infiniti Q70L also is expected to account for about 40 percent of all Q70 sales.

The brand then offers all of the advantages of the 2015 Infiniti Q70 in a greener, hybrid configuration that can achieve EPA marks of 29 mpg city/34 mpg highway/31 mpg combined—but without trading away its sport-sedan performance capabilities.

In fact, the 2015 Infiniti Q70 Hybrid squeezes an extra 15 lb.-ft. of torque from its 50-kW electric motor for the new model year, with that unit currently able to contribute 67 hp and 214 lb.-ft. of torque to the car's power totals. Complementing that output is a 302-hp, 3.5-liter V6 that can deliver 258 lb.-ft. of torque, with the efficiency/performance balance further fine-tuned by innovative electronic braking and steering technologies from the brand.

The bottom line here, according to the brand, is that the 2015 Infiniti Q70 Hybrid "continues to stand out as a true luxury-performance 'driver's' hybrid" for the new selling season. 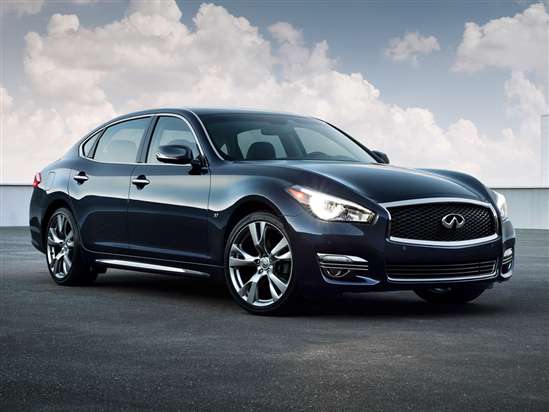