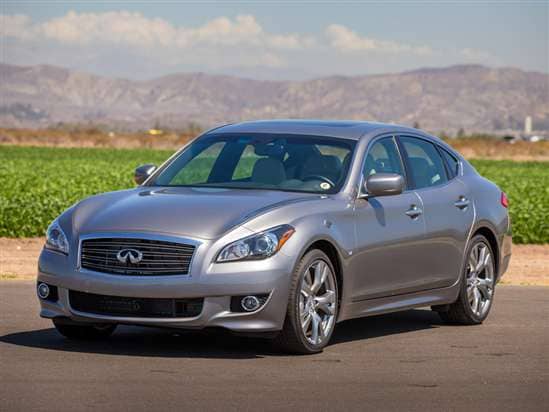 The models formerly known as the Infiniti M56 and M35 have a new nomenclature going into the 2014 model year. The cars shall henceforth (OK, well, until they change them again) be known as the Infiniti Q70. Going into the 2014 model year, all Infiniti nomenclatures will begin with the letter Q, because a simple alphanumeric nomenclature system wasn’t confusing enough for the Tennessee-based sub-brand of the Japanese car company owned by a French conglomerate.

Powerful, luxurious, and exceptionally well-balanced, Infiniti’s often-overlooked line of luxury sport sedans is a driving enthusiast’s delight. Further, the Q70 is outfitted with first rate materials and attention to detail, while offering a broad array of state of the art comfort, convenience, and tech features. In review after review after review, the Infiniti M cars (now known as the Infiniti Q70) compared highly favorably to their competitors from Mercedes, BMW, Lexus, and Audi.