Infiniti builds stylish cars and SUVs that handle well but struggle for market share against the likes of Lexus. That’s tough competition. And for me, Infiniti’s fairly recent decision to rename its vehicles hasn’t helped. When assigned to write this test and review of the new 2017 Infiniti Q60, I wasn’t sure if it was a sedan, coupe, or an SUV. The answer: It’s essentially the new Infiniti G37 Coupe, which assumed the Q60 name in 2015 and is now a totally new vehicle for 2017.

Let’s take a look at this head-turning new 2017 Infiniti Q60, which is built in Tochigi, Japan, on the Q50 sedan’s FM-L platform and is available with a trio of engines.

From every angle, the new Q60, which is slightly lower and wider than the previous car, looks great. If you squint, you can see the basic shape of the old G37 in the new design, but this new rear-drive coupe has what Infiniti calls a “powerful elegance.” This is a sports coupe that looks athletic and refined, a handsome update on an already attractive car. The LED headlights emulate the human eye, while the inset grille communicates a strong connection to the engine. The overall lines of the new Q60 flow nicely, and tighter gaps between tire and fender serve to visually lower the car.

What Does it Cost?

What Does it Cost?

At the top of the Q60 price (and performance) ladder is the Q60 Red Sport, priced at $51,300 (or $53,300 in AWD form). While that’s a big step up in price, it’s the most potent Infiniti sports coupe ever, and it complements all that newfound power with larger brakes (with red calipers), sportier suspension tuning, and super supportive seats covered in a beautiful semi-aniline leather. This Red Sport 400 also happens to be the Q60 I drove at the car’s recent press introduction.

In a word, great. The new 2017 Infiniti Q60 is a car that masks its speed in eerie fashion. It’s so solid and quiet that it makes 60 mph feel like 40, and 80 feel like 60. And did I say it’s fast? If you dip into the throttle to pass somebody on the highway, triple digits sneak up on you. Thanks to the small turbos, the Q60 engine responds in quick and linear fashion without need to wait for boost. Similarly, the 7-speed automatic transmission (no manual is available) works well, downshifting when needed and upshifting with a satisfying crispness when you’re hard on the throttle. Paddles are there if you’d like, and the automatic-blip downshifts aid your canyon-carving fun. The Red Sport has excellent 57/43 weight balance, and, what’s more, the brakes exhibit great stopping power. If I had one quibble, it’s this: The Q60’s ride quality in all but the softest setting is on the firm side of acceptable.

Yes, the 2017 Q60 Red Sport 400 has “steer-by-wire,” a second generation system with no mechanical link to the front wheels. It sounds scary to me too, but the system works well. While I understand the first generation had problems with unnatural feel, such is not the case in the Q60. Steering effort is designed to increase with speed and cornering force.  If I hadn’t known the new Q60 had what Infiniti calls Direct Adaptive Steering, I would have guessed it had a conventional rack with possibly electric assist.

Basically, steering input is measured, and a steering angle actuator adjusts the cutting path of the front wheels accordingly. The effort and ratio are adjusted for the situation at hand, and, just think, there’s no vibration going from front tires to the steering wheel, reducing driver fatigue. On my brief drive of the new Q60, I left the steering in standard mode most of the time, with the response set to default. It felt precise and natural to me; I’ll explore the Sport and Sport + modes (which change engine and transmission mapping) later, along with the Dynamic and Dynamic + response settings.

Yes, the Infiniti Q60 Red Sport 400 also has what the company calls Dynamic Digital Suspension. In this system—designed to work in tandem with DAS and employing electrically adjustable shock absorbers—the Q60’s body roll, pitch and bounce are constantly measured so the proper level of damping can be applied to create a soft or firm ride. Infiniti says the soft settings balance comfort and handling, while ensuring that bumps are soaked up well. With firmer damping, flat and agile cornering was the goal, and here Infiniti has succeeded. With DDS, drivers can choose between Standard and Sport modes; as mentioned, even the Standard setting is firm.

Via the big 8-in. color screen on the center stack, the Q60 driver can access the Infiniti Drive Mode Selector. This multifaceted control panel with the knurled round controller on the center console allows you to choose among four engine/transmission settings (Sport, Eco, Standard, Snow), six mode and response settings for the DAS steering, and either Sport or Standard for the DDS suspension.

With regard to engine and transmission settings: In Standard mode, engine and transmission are in regular tune, complemented by everyday chassis settings that offer low effort, quick ratio steering around town and increased effort, slower ratio steering for better stability at speed. Of note, DAS and DDS are available only on Q60s equipped with the V6.

With 336 possible combinations accessible via the Drive Mode Selector, is there too much adjustability in the new Q60? I think so. While tech heads might like being able to adjust so many parameters in their new Q60, what’s wrong with buying a car that’s already set up well for a variety of needs. Just get in the car and drive, without deciding which steering and suspension and engine response I need today. The band Devo, in a great song from 1980, sang: “Freedom of choice is what you’ve got. Freedom from choice is what you want.” That applies here. At least with me (to some extent) and the new Infiniti Q60.

I spent the better part of the day in an Iridium Blue Infiniti Q60 Red Sport 400, a rear-wheel-drive model fitted with a Gallery White interior. While I tend to think white interiors look too Vegas, the Q60’s manages to avoid being garish. Moreover, the semi-aniline leather looks to be of great quality, and the smooth actuation of all the various switchgear underscores that point. The Q60 has a high-waist bunker feel from inside, but the driver seat is comfortable, with supportive bolsters going high up your back. It’s a quiet cabin, aided by active noise cancellation, standard on all Q60s. The analog instruments are easy to read, and the 13-speaker Bose audio system positively fills the Q60 cockpit. Also of note: Infiniti’s InTouch infotainment system now has a faster processor and is able to store profiles for multiple drivers.

Most adults won’t want to sit in the Q60’s cramped rear seat, especially when the fronts are all the way back. The rear seatback does fold forward, helping the Q60 carry long cargo. That small pass-through is the price you pay for having such a robust chassis.

Like a motorcycle, a sport coupe like the Q60 is a personal choice, an object of desire. Worldwide, 2-door cars represent only about 5 percent of new car sales. Nobody really needs a coupe. But after my drive in the $59,555 2017 Infiniti Q60 Red Sport 400, I can see how you might change your mind. Whatever its name—G coupe or Q60—the new Infiniti coupe is a fine automobile, beautifully built and blessed with head-turning style and a superb new engine that just won’t quit. It’s fast, it’s settled, it looks great, and in our 200-mile drive in which we were no stranger to the throttle, it averaged 20.4 MPG. A command performance, I’d say.

PS: About Those Infiniti Names

PS: About Those Infiniti Names

If, like me, you're not up to date with Infiniti's naming system for its models, let this handy photo serve as a quick tutorial. It's basically as follows:

The former G Sedan is the Q50. 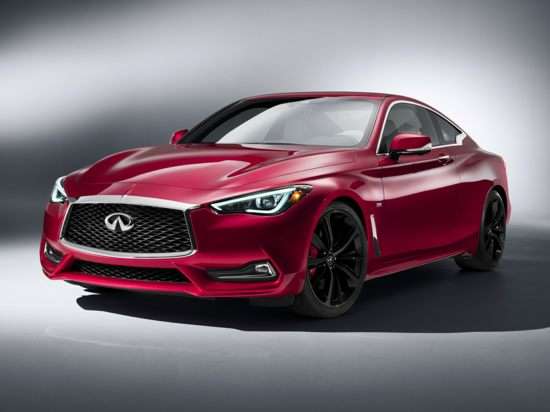