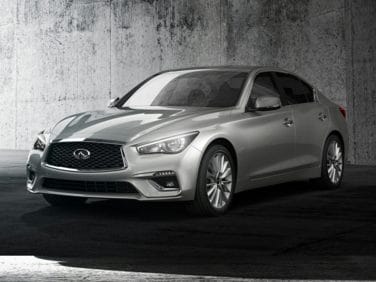 All About Infiniti Q50

The Q50 is a replacement for Infiniti’s discontinued G sedan, and its styling is picked up from Infiniti’s recently refreshed overall brand design. The base model Q50 borrows the engine from the G37, which is a 3.7-liter V6 that yields 328 horsepower. However, the Q50 is more notable for its all new gasoline-electric hybrid engine option, which actually produces more power than the traditional gasoline engine. The hybrid is a 3.5-liter V6 with a 50 kW electric motor and a lithium ion battery, and this combination produces 354 horsepower. In the future, the Q50 will have additional engine configurations to make the car more suitable in global sales markets. As of the car’s debut, both engine options were mated to a seven-speed automatic transmission equipped with rev matching technology. The Infiniti Q50 comes standard with rear-wheel-drive, but all-wheel-drive will be an option on both versions of the car.

Buyers of the Infiniti Q50 can choose options such as sport suspension, performance tires, and higher end wheels. And of course, the new model ups the ante when it comes to new technology offerings. The Infiniti Q50 offers new driver-friendly features such as direct adaptive steering, which allows each wheel to be independently controlled and can also follow preset modes, and active lane control, which helps monitor the car's surroundings and the road's conditions to keep the car in the desired lane.

The cabin's similar to other Infiniti offerings, featuring high quality interior materials and a good integration of technology features. The only unfamiliar aspect of the cockpit is the new Infiniti InTouch control system, which is composed of two large displays that allow the driver to access almost everything in the car. Most of the cockpit's usual controls have been consolidated into InTouch; the only physical knobs that remain are for climate and audio controls. Since the InTouch system features two screens, one can be used for controlling the car's functions while the other continues to display the navigation map. As implied by the name, InTouch is a touch screen system to improve ease of use, and it comes preloaded with a bunch of apps. The InTouch system can also be customized to recognize up to four different keys, so each driver in the household can set up his or her own preferences. Though the Infiniti Q50 is under a lot of pressure to fill the void in the Infiniti family left by the departure of the G sedan, the Q50 appears to be worthy of the responsibility.