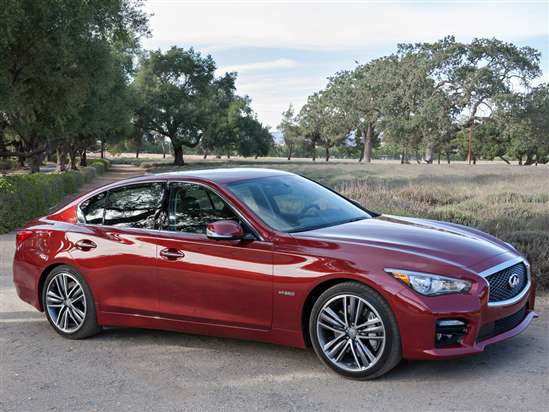 The Infiniti Q50 Hybrid is a more fuel-efficient, and expensive, version of the new 2014 Q50 model.

The 2014 Q50 Hybrid is offered only in Premium or S trim levels, and the content of each varies from the standard Q50 3.7 models.

For example, the Q50 Hybrid Premium model includes leather seats, a power tilt/telescopic steering wheel, and the automaker’s new Direct Adaptive Steering system, whereas the Q50 3.7 Premium does not. Install the optional all-wheel-drive system, and the hybrid model adds a heated steering wheel that in not included for AWD versions of the Q50 3.7.

Furthermore, when choosing the Q50S Hybrid model, keep in mind that it does not come with the same sport-tuned suspension as the Q50S 3.7 model.

In addition to slightly different standard equipment, the Q50 Hybrid is optioned differently from the Q50 3.7. The Navigation Package includes the same features, such as the company’s new InTouch navigation system, Infiniti Connection services, and satellite radio. And the list of dealer-installed accessories is nearly identical. The difference is that the Deluxe Touring Package adds much more equipment to the Q50 Hybrid than it does the Q50 3.7.

Highlights of that package include upgraded interior trim, memory for the driver’s settings, an Eco Pedal system designed to encourage more efficient driving, and a more sophisticated climate control system with air filtration and purification. Numerous safety features are also included in the Q50 Hybrid’s Deluxe Touring Package, and are detailed below in the Technology Highlights section.

The 2014 Infiniti Q50 Hybrid is equipped with what the automaker calls its Infiniti Direct Response Hybrid powertrain, a one-motor, two-clutch system that pairs a 3.5-liter V-6 engine with a 50 kW electric motor, a lithium-ion battery, and a 7-speed automatic transmission that does not employ a traditional torque converter. Total system output measures 360 horsepower, which is fed to the rear wheels or, as an option, all four wheels.

According to the EPA, the Q50 Hybrid gets 31 mpg in combined driving. Choose the optional AWD system, and that number dips to 30 mpg.

As this model summary is written, the 2014 Infiniti Q50 Hybrid has not been crash-tested by the National Highway Traffic Safety Administration (NHTSA) or by the Insurance Institute for Highway Safety (IIHS).

Opt for the Infiniti Q50 Hybrid’s Deluxe Touring Package, and the car is equipped with rain-sensing wipers, an Adaptive Front Lighting System with High Beam Assist headlights, and a full-speed-range Intelligent Cruise Control system with Distance Control Assist. Front and rear sonar systems are added to the car, as well as an Around View Monitor and Moving Object Detection technologies.