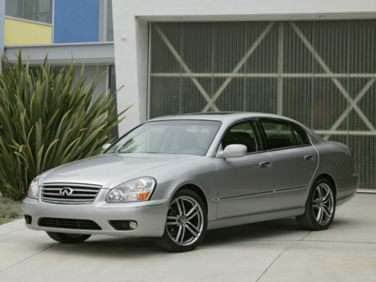 All About Infiniti Q45

Nissan created Infiniti from scratch back in 1985, when the company’s executive team decided to develop a new performance luxury brand for the U.S. market. More than just a new kind of car for the company, the goal of Infiniti was to also introduce a new ethos when it came to the customer’s purchase and ownership experience.

The client oriented policies of companies such as Federal Express, Four Seasons Hotels and Nordstrom department stores were analyzed and elements of each were infused into what the Infiniti brand management team came to refer to as the Infiniti Total Ownership Experience. The look of the original Infiniti showrooms was patterned after the décor found in luxury hotels. The deferential treatment afforded customers of high-end department stores became the rule at Infiniti dealerships—in sales and in service.

The first 51 Infiniti dealers opened their doors to customers on November 8, 1989.

When those customers arrived, they found a very distinctive flagship sedan—the 278-horsepower rear-wheel drive 1990 Infiniti Q45 sedan. The Q45’s 4.5-liter V8 was one of the most powerful engines in the class when it debuted. Further, the Q45 was equipped with four-wheel steering, a limited-slip differential, and an active multi-link suspension system.

From the outset the Q45’s aim was to place just as much emphasis on performance as it did luxury. And indeed, the Q45 was capable of dashing to 60 miles per hour in 6.7 seconds from rest. The Infiniti Q45 was an absolutely brilliant car, many reviewers say it was the finest luxury sport sedan the world had ever seen.

Unfortunately, this message was never properly conveyed. The Infiniti brand was launched with advertising that ultimately became the textbook example of how NOT to introduce a new automobile to the marketplace. In its quest to convey the newfound attitudes customers would encounter at Infiniti dealerships, the introductory campaign was devoid of any mention or images of the car. Instead it focused on a Zen-like discourse on running water, ripples in a pond and haystacks in a field.

While the ads stood out, people had no idea what product they were for because you never saw the car. Fold in the unconventional styling of the Infiniti—employing a cloisonné badge in place of  a grille—and the Infiniti Q45 was hamstrung right out of the gate. Once the late-night talk show hosts started making fun of the ads, the Q45 was pretty much sunk.

Sales of the car were discontinued after the 2006 model year.