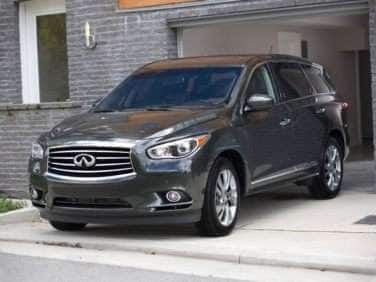 All About Infiniti JX35

Based upon Nissan’s Murano midsize sport utility vehicle, the Infiniti JX35 gives Infiniti a strong new type of competitor in the mid-size luxury SUV marketplace. With seating for seven, tilting and sliding second–row seats, and abundant passenger, as well as cargo capacity, the JX35 is a textbook example of what a car company can achieve when it lets its competitors go first.

Yes, the Infiniti pretty much cribs off of the Lexus RX.

As is to be expected of an Infiniti product, interior materials employed are first rate. However, on the performance side of the spectrum the 3.5-liter V6 is a bit taxed in this application, tasked as it is with motivating 4,280 pounds. Fuel economy is a bit on the “nothing to write home to mother about” side too. The EPA quotes 18 mpg in the city and 24 on the highway—21 combined for the front drive powertrain. The all-wheel drive powertrain is reputed to deliver some 20 miles per gallon combined.

That’s respectable, but not exactly fantastic.

A continuously variable transmission with pre determined ratios for the “sport” setting routes power to either the front wheels, or all four—if you opt for the all-wheel drive powertrain configuration. However, with but 265 horsepower and 248 ft-lbs of torque to manage all of that mass, the JX35 has a bit of trouble living up to the Infiniti brand’s performance image.

With that said, it’s important to recognize Infiniti leaves the SUV performance flag to fly proudly over the FX crossover in its lineup. The Infiniti JX is designed to appeal to people who think the FX looks too unconventional and/or rides a bit too firmly for their tastes. More about plush than push, the JX emphasizes ride over stride.

On the other hand, you’ll find lots of room inside the Infiniti JX35—along with an abundance of standard luxury features. These include a power liftgate, along with keyless entry and start. You’ll also find heated exterior rear view mirrors, automatic xenon headlights, foglights, and LED taillights. The base audio system features six speakers, satellite radio, and an iPod interface. Bluetooth, a rearview camera, and leather upholstery are also included. Cargo capacity is a positively cavernous 76.5 cubic feet with the rear seats folded.