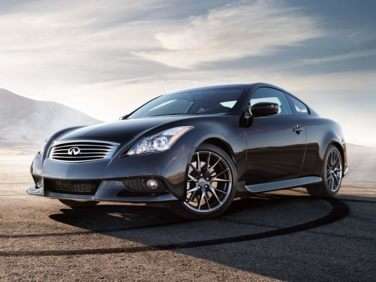 All About Infiniti IPL G

Essentially, the Infiniti IPL G is a fully loaded Infiniti G37 Sport Coupe with every option fitted as standard equipment. The acronym “IPL” stands for Infiniti Performance Line, which is the unwieldy moniker Nissan’s premium brand has affixed to the cars it tweaks for higher performance.

The idea is to give Infiniti buyers a step up from its Sport models while still slotting in as a more reasonably priced bridge to BMW's M, Cadillac's V, Audi's S, and Mercedes-Benz's AMG cars. Given Infiniti’s cars already offer significant bang for the buck performance-wise, tweaking them thusly adds considerable value to the proposition.

To get from standard G37 Coupe to IPL G, Infiniti’s product planning team got together with the engineering group and came up with a new aero kit featuring new front and rear bumper/fascia designs. Highlights include integrated fog lights and black finishers; there are also sculpted side sills, a rear spoiler, and chrome exhaust tips. Rather than looking “tacked on” however, each part was shaped to both compliment and accent the standard G Coupe's already handsome and distinctive styling.

The look is crowned, (or rather “grounded” if you will) with a set of IPL exclusive 19-inch split seven-spoke graphite-finish wheels, wearing extra-sticky low-profile Bridgestone Potenza RE050A performance tires. All told, the Infiniti IPL G is posed with a confident stance and mucho attitude.

A 3.7-liter double overhead cam V6 engine powers the IPL G. Power output is rated at 348 horsepower and 276 ft-lbs of torque. This is up from 330 and 270 in standard G37 applications. This was achieved by recalibrating the engine management system to take advantage of the freer flowing dual exhaust system. The first true dual exhaust system to be fitted to a G Coupe, its larger diameter pipes and reworked muffler system also resulted in deeper exhaust note than the already delicious G37’s.

In addition to raising the horsepower peak of the engine to 7,400 rpm (up from 7,000) its torque curve was tuned to become more linear by the recalibrations—making the engine pull more strongly over a broader band of its rev range. The visceral result is more acceleration in the mid-range.

Ipso facto, the IPL G handles better, sounds more aggressive, revs more freely, and boasts an additional 18 horsepower — along with six more pound-feet of torque. With the Infiniti IPL G, Infiniti has taken one of the nicest six-cylinder luxury sport coupes available and made it a touch more aggressive and considerably better equipped than it was previously.