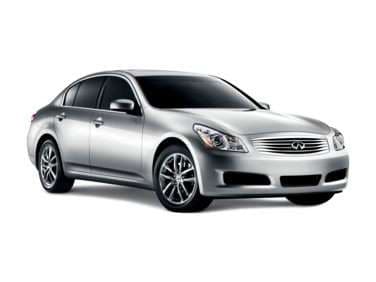 All About Infiniti G35

The Infiniti G35 is a four-door, five passenger mid-size luxury sedan, and a two-door, four-passenger mid-size luxury coupe. The Infiniti G35 was a revelation for the luxury company when it was introduced as both a sedan and a coupe in 2003. Previously, the Japanese luxury automaker had focused on re-branding Nissan products, but the G signaled a new freedom to interpret the platforms that Nissan had been developing to update their product line. The coupe was similar in many ways to the Nissan 350Z, but the rear-wheel drive sedan had no direct analog in the parent-company’s lineup. Buyers flocked to both vehicles in droves, and the G became one of the most popular additions to the luxury car market.

For 2008, the Infiniti G35 has been further divided in order to reflect the evolution of both the sedan and the coupe. The two-door has been branded the G37 to separate it from the G35 sedan. Part of the reason for this change in nomenclature is the use of two separate engines for the first time. The G35 retains an improved version of the ubiquitous VQ 3.5 liter V6, which generates 306 horsepower and 268 lb-ft of torque, while the G37 steps up to a slightly larger 3.7 liter version of the same V6, giving it identical torque but a 24 horsepower advantage. Depending on whether the Journey or Sport 6MT trim are specified, both the sedan and the coupe can use either a 6-speed manual or 5-speed automatic transmission with an impressive manual mode that employs automatic rev-matching on downshifts. All-wheel drive is an option for either vehicle.

Naturally, with this kind of power on tap acceleration is excellent. The sedan can hit 60 miles per hour from a standing start in less than 6 seconds, and both cars display excellent handling, especially if ordered in 6MT trim. Aside from the manual transmission, this trim provides larger front and rear brakes, as well as 19-inch wheels in place of the standard 18’s. A fully independent suspension keeps the G firmly planted in corners, yet the ride is still plush enough to avoid spilling your cup of coffee over rough road on the way to work in the morning – a good balance between comfort and performance.

Further evidence of Infiniti’s focus on comfort can be found in the car’s amenities and features. All G’s come with power leather seats, and the interior is highlighted by aluminum accents that hint at the vehicle’s sporty nature. Cruise control and a trip computer combine with HID headlights and LED taillights to make the driver’s job that much safer. A Premium options package adds a nicer stereo and a power moon roof, while a Sport package installs a limited-slip differential and a stiffer suspension to make the most of the vehicle’s power. This is the same package that comes standard on the Sport 6MT version of the vehicle.

The Infiniti G35 has something for everyone. For those who require the use of a functional back seat, the G35 provides excellent luxury in a fun to drive package. If passenger space is not a requirement, then the graceful lines of the G37 coupe make the perfect set of wheels for anyone who enjoys to be simultaneously coddled and thrilled.

The 2009 Infiniti G35 coupe is a carryover from 2008, while the 2009 G sedan features a new drivetrain. The 2009 G37 coupe comes in several different trims: base, Journey, x and Sport 6MT. All editions of the two-door come with the same 3.7 liter, 330 horsepower V6 engine. Capable of producing 270 lb-ft of torque, each versions but the Sport 6MT feature a 7-speed automatic transmission that can be shifted manually if desired. The Sport 6MT uses a traditional 6-speed manual transmission. Fuel economy for the automatic models is rated at 18 miles per gallon in the city, and 26 miles per gallon on the highway. The Sport 6MT sees fuel mileage that is one mile per gallon lower for both measures. The 2009 G37x coupe features all-wheel drive.

The 2009 G37 sedan moves to the same engine as the coupe for 2009, although the V6 sees a 2 horsepower drop and produces 1 fewer lb-ft of torque when compared to the version installed in the two-door. Trim levels are identical, as is fuel mileage.