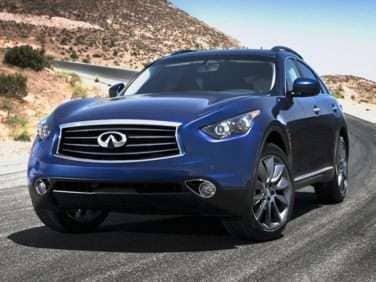 All About Infiniti FX35

The Infiniti FX35 is a four-door, five passenger mid-size luxury crossover sport-utility vehicle. When Nissan-owned Infiniti decided to join the luxury crossover game in 2003, instead of looking to their parent company’s lineup of sport-utility vehicles they snatched the same platform used to underpin the Nissan 350Z sports car. That fact alone says a lot about the attitude and focus of the Infiniti FX, a mid-size SUV that does its best to genre-bend with the best of them. With a shape that is both car-like and yet distinctly utility-oriented, the FX has developed a reputation for offering a sporty, powerful ride.

For 2009, the Infiniti FX35 rides on a brand new, second generation platform. The crossover retains its aggressive features, with a fresh front-end snarl matched with jagged, angular headlights carved into the front fenders. The sloping rear roofline and muscular fenders remain largely untouched. The model lineup is still divided primarily by engine choice. The FX35 offers buyers the same 3.5 liter V6 engine that is found under the hood of the G35 sport sedan, and in the crossover it produces 303 horsepower and 262 lb-ft of torque thanks to dual-overhead camshafts and variable-valve timing. The FX50 replaces the outgoing FX45, employing an even larger V8 engine than the previous model. The 5.0 liter power plant belts out 390 horsepower and 369 lb-ft of torque. Both versions of the FX use a 7-speed automatic transmission with manual shift mode, and while the FX35 can be had in either rear or all-wheel drive, the FX50 is available exclusively with all-wheel drive.

Inside, the FX is just as beautiful. Power leather seats are standard for each model, as are a plethora of other power accessories. Rear-seat heating controls, a moon roof and an electronically assisted lift gate highlight some of the basic equipment. The FX35 can be optioned to include a navigation package that provides a color touch screen which displays directions and combines with XM satellite radio to receive real-time traffic updates. It can also be controlled by voice commands, and this feature is standard on the FX50. The FX50 also benefits from an optional Sport package which adds an adaptive suspension system and rear steering in order to improve the handling of the SUV, and an optional lane departure warning system and intelligent cruise control help to keep the crossover between the lines and a safe distance from vehicles in front of it.

Both engines provide excellent acceleration, but the lighter V6-powered FX is more nimble in the turns than the FX50. Fuel mileage for the V6 engine is 16 miles per gallon in the city and 21 miles per gallon on the highway, while the V8 dips to 14 and 20 – still excellent numbers for an engine with this kind of power.

The 2009 Infiniti FX35 is a step forward for the company. While the FX is not the most off-road friendly crossover on the market, given its impressive street performance it has no need to be. The vehicle is still capable of providing the excellent ride and handling that repeat buyers expect, and the styling has been updated to draw new drivers into the fold.