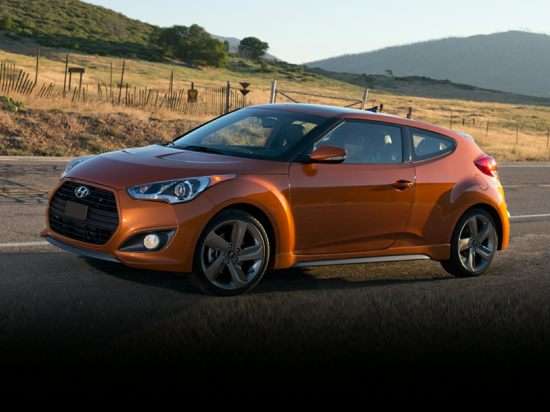 Changes for the 2014 Hyundai Veloster:

All 2014 Veloster models get a standard driver’s side blind-spot mirror, a reversing camera, and Blue Link telematics with a free 3-year subscription to services. The 2014 Veloster Turbo adds standard Torque Vectoring Control and receives an Active Sound Design powertrain sound enhancement system for 2014. Hyundai also expands the lineup with the addition of the Veloster RE:FLEX and the Veloster Turbo R-Spec models.

For 2014, the Hyundai Veloster is offered in standard, RE:FLEX, Turbo, and Turbo R-Spec trim levels.

Veloster Turbo models get their own set of 18-inch wheels, as well as revised front styling, projector-beam headlights, fog lights, LED positioning lights, and LED taillights. A sporty body kit and turn signal indicators embedded into the side mirror housings are also standard. Inside, electroluminescent gauges, a leather-wrapped steering wheel and shift knob, heated front seats, automatic operation for the driver’s window, and upgraded interior materials are included, along with a keyless passive entry system with push-button starting and a premium sound system.

In addition to these upgrades, the Veloster Turbo R-Spec includes unique seats with red and black cloth inserts and leatherette bolsters, R-Spec floor mats, and R-Spec exterior badges. This model can be optioned with red exterior accents for a sportier appearance.

The 2014 Hyundai Veloster is equipped with a 138-horsepower, 1.6-liter 4-cylinder engine paired with a standard 6-speed manual gearbox or an optional 6-speed automated dual-clutch transmission (DCT). The Veloster RE:FLEX variant includes the DCT as standard equipment.

Choose the 2014 Veloster Turbo for its turbocharged, 201-horsepower, 1.6-liter 4-cylinder engine, which makes its peak 195 lb.-ft. of torque starting at just 1,750 rpm. A 6-speed manual gearbox and Torque Vectoring Control are standard, with a 6-speed Shiftronic automatic transmission available as an option.

The new 2014 Veloster Turbo R-Spec adds hardware upgrades in the form of performance-tuned steering and suspension settings plus a B&M Racing short-throw shifter for the 6-speed manual gearbox, which is the only transmission available for this model.

When equipped with a manual gearbox, the Veloster gets 30 mpg in combined driving. Add the optional DCT and that number rises to 31 mpg. The Veloster Turbo is rated to return 28 mpg, while the optional automatic transmission knocks that number down to 27 mpg.

As this summary is written, neither the National Highway Traffic Safety Administration (NHTSA) nor the Insurance Institute for Highway Safety (IIHS) has performed crash tests on the 2014 Hyundai Veloster.