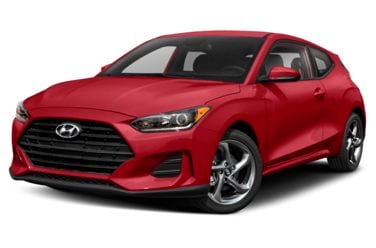 All About Hyundai Veloster

The Hyundai Veloster, a compact entry level vehicle, was developed to fill the void in the Hyundai lineup after the Tiburon coupe’s production came to an end. It was premiered at the Detroit Auto Show in January of 2011 and began to appear on dealer lots in the United States shortly thereafter. The Korean automaker needed to round out the brand’s lineup and provide an offering that wouldn’t cannibalize sales from its part subsidiary, the entry-level Kia brand. (Though the Veloster has some similarities to Kia’s Cee’d hatchback model, that car is not sold in all of the Veloster’s target markets.)

The Veloster is a three-door hatchback that features one driver’s side door and two passenger side doors, designed to appeal to a more youthful demographic of buyers. The car has an aggressive profile with a dramatic sweep of the roof line into the hatch, with a wide-looking stance over the wheels. The front-wheel-drive Veloster is powered by a 1.6-liter, 4-cylinder direct injection engine that is mated to a six-speed manual transmission. A six-speed dual clutch automatic is available as an option. This powerplant provides the Veloster with 138 horsepower. Both transmission combinations yield a combined fuel economy rating of 31 mpg.

United States customers can upgrade their new Velosters with a style package, with a tech and style package combination, or with the ultimate package, that adds a panoramic sunroof. The various package upgrades include features such as front fog lights, premium alloy wheels, better interior finishes, a navigation system, and a high-end audio system. The Veloster Turbo model also offers a performance upgrade in the form of a twin-scroll turbocharged engine as well as a new body kit and several other distinctive exterior and tech upgrades. Packages and options vary in all of the Veloster’s markets, but it’s worth noting that there is a “BlueDrive” option in Europe, which improves the Veloster’s efficiency by adding stop-start engine technology and low rolling resistance tires.

Hyundai has made several obvious efforts to help the Veloster appeal to the highly coveted younger customer base, since these customers are believed to be relatively easy to convert into lifelong brand enthusiasts. Hyundai’s emphasized the Veloster’s performance potential by getting the car out in front of motorsports enthusiasts. A modified Veloster was used in the 2011 and 2012 Global Rallycross Championship Series racing, with a 500-horsepower engine and an all-wheel-drive system. Modified Velosters have also been shown at several car shows, including several SEMA concept cars and a Hyundai-designed concept car that featured a rolling canvas roof and plenty of fresh exterior design elements.