Limited to customers in southern California, the Hyundai Tucson Fuel Cell is offered under a three-year lease for $499 monthly, which includes unlimited refueling. A $2,999 down payment is required to take possession of the hydrogen-powered Hyundai model.

The company’s representatives say the fuel cell Tucson offers a range of approximately 265 miles, and can be refueled from empty in about 10 minutes.  Like the Honda FCX Clarity, the Hyundai uses a hydrogen fuel cell to generate electricity to feed its electric motor. Its top speed is said to be 100 miles per hour.

This makes Hyundai one of the first mainstream manufacturers to market (albeit an extremely restricted market) with a hydrogen fuel cell powered automobile. Currently being offered at three southern California Hyundai dealers, the Tucson Fuel Cell can be acquired at Tustin Hyundai, Win Hyundai in Carson, and Hardin Hyundai in Anaheim. Availability will be expanded as more hydrogen fueling stations come on line.

To make the prospects of owning one even more enticing, Hyundai is offering the Tucson Fuel Cell with some of the advantages of the Hyundai Equus “At Your Service” program. Should a Tucson Fuel Cell SUV require any service, a Hyundai dealer will pick up the vehicle, provide a loaner, and return the Tucson FCV after service to the lessee’s home or business, at no charge.

Offered in one level of trim, the Tucson Fuel Cell is equipped similarly to the top of the line Limited version of the compact SUV. This means you’ll get automatic projector beam headlights with LED accents, fog lights, LED taillights, power folding heated exterior mirrors, backup sensors, intermittent wipers both front and rear, and a windshield wiper de-icer.

The four-spoke steering wheel is leather wrapped, adjusts for tilt and telescoping, and contains audio and Bluetooth controls. Speaking of which, Bluetooth audio streaming and handsfree telephony are included. All of the seats are heated, upholstered in leather, and the driver’s seat is power adjustable. Dual-zone automatic climate control and illuminated vanity mirrors for the driver and front passenger—in addition to full power accessories are featured as well. Keyless entry and keyless start, a trip computer, three 12-volt power ports, and iPod/USB/auxiliary audio input ports are included as well.

Doing the math, with $2,999 down and 36 payments of $499, the price of the Tucson Fuel Cell works out to be $20,693. Keep in mind that $499 figure does not include tax, license and title fees, which can add an additional $70 or so a month in the area where the Tucson Fuel Cell is currently being offered. All told, this will add up to roughly $23,000 in payments over the three-year term of the lease.

The recent styling renaissance at Hyundai is well documented, with the marque offering some of the best looking cars in their price ranges. Taken as a whole, the Tucson’s design solidly reflects this. The look is clean, contemporary, and highly appealing to a broad swath of the motoring public.

In terms of appearance, there’s precious little to make the Tucson Fuel Cell stand out from its gasoline-powered siblings. If you look VERY closely you’ll note the Fuel Cell Tucson is four-tenths of an inch longer overall than the standard model. Also, there’s the obligatory Fuel Cell badging, which is actually a port-installed option.

Most notably, the Tucson Fuel Cell gets a single-piece grille treatment up front, where the gasoline powered Tucson models sport a two-tiered grille with a chrome splitter wearing the Hyundai badge.

Seen in profile, the Fuel Cell Tucson wears badging at the leading edge of the front doors, where the standard models have none. Further, the lower body cladding at the base of the doors is finished in silver for the Tucson Fuel Cell model. Sharp-eyed observers will also note the fuel filler cover is different.

The most obvious difference at the rear is the “Fuel Cell” notation on the right side of the rear hatch. Beyond that, it’s pretty much the same as all other Tucson models. Which, it to say it’s a nice-looking automobile overall.

Similarly, seated at the wheel of the Hyundai Tucson Fuel Cell, you have to look very carefully to determine you’re in the alternatively fueled version of the Hyundai. The biggest giveaway is the ‘Fuel Cell” notation just underneath the Tucson’s trip computer in the instrument panel. This offers information regarding fuel economy, the number of times the Tucson Fuel Cell has been refueled, and the estimated range based on the current fuel level and how vigorously the Tucson is being driven.

The binnacle also contains two main dials; one contains the speedometer, transmission position, and fuel level indicator; the other one features Hyundai’s “Blue Drive” readout measuring the amount of power in use as the Tucson is underway and the battery’s charge level. This dial also indicates when the vehicle is powered up and ready to drive.

Given the Tucson Fuel Cell is essentially an electric vehicle; this is useful, as there is no engine noise or vibration at idle to let you know the vehicle is activated. This dial also shows the external temperature, operating temperature of the Tucson, and the status of the doors and rear hatch—among other useful tidbits of information.

Beyond that, you might as well be seated in the Hyundai Tucson Limited. The interior treatment is both handsome and well laid out. To the right of the steering wheel, the seven-inch touchscreen monitor dominates the center stack and features interfaces for the audio system, navigation system, and telephone. These functions are also voice activated at the push of a button on the steering wheel. The automatic climate control interface resides just beneath the monitor, with the switches for the seat heaters and the transmission gear selector appearing in descending order.

The tilt and telescoping steering wheel goes a long way toward enabling just about any driver to find a comfortable operating position in the Tucson Fuel Cell. The electrically adjustable seat helps things along as well in this regard. During our time behind the wheel, we found the seats to be comfortable, firm in all the right places and equally supportive. Given our longer legs, we’d be appreciative of a bit more lower cushion, or a thigh bolster extension, but this isn’t a deal breaker by any means.

The Fuel Cell Tucson’s body structure is pretty much identical to the gasoline-powered Tucson, so crash test ratings are identical. NHTSA gave Tucson four out of five stars for overall crash protection—four stars for frontal impacts and five stars for side impacts.

Regarding the hydrogen, Hyundai’s representatives say there have been no reported cases of catastrophic failure of a storage tank. If a leak occurs, there is almost no risk of explosion because hydrogen is lighter than air and rises immediately, minimizing the risk. If the Tucson Fuel Cell vehicle is stored in an enclosed space, four onboard hydrogen sensors are designed to detect leaks and sound an alarm.

Destructive and non-destructive evaluations at the component, system, and vehicle level have been performed, including crash tests and fire tests. Further, internal safety mechanisms are fitted to ensure safety. For example, impact sensors stop the release of hydrogen from the tanks in crash events. If there is a leak when the Tucson is parked—or fueling—the hydrogen will dissipate quickly into the air, without polluting.

It helps to think of the Tucson Fuel Cell as an electric car you’ll never need to plug in. This is because the hydrogen-fueled Tucson actually uses an electric motor to generate propulsion; it also has a battery to store electricity and power the vehicle when it is idling to minimize hydrogen consumption while stationary.

The 100 kW electric motor produces 134 horsepower at 5,000 rpm and 221 ft-lbs of torque at 1,000 rpm. This means maximum torque is available pretty much right of the line. A single-speed transmission sends the engine’s output to the front wheels. The lithium-polymer battery is good for 60 amp-hours at 24 kW.

For those unfamiliar with how hydrogen fuel cells work, hydrogen and ambient oxygen are combined in what is known as a proton exchange membrane fuel cell stack. The resulting chemical reaction generates electricity (100 kW in this case) and water. The electricity is supplied to the motor, with any excess going into storage in the battery.

The Tucson Fuel Cell is capable of carrying the equivalent of 38 gallons of hydrogen. Fuel economy is rated at 49 miles per gallon in the city, 51 on the highway, and 50 combined. Refueling from empty takes less than 10 minutes.

Aside from the subdued whine of the electric motor, the slipstream, and the sound of the tires interacting with the pavement, the Tucson Fuel Cell is pretty much silent in operation. It is, for all intents and purposes an electric automobile. Hyundai says it’s good for a 12.5 second run to 60, and our experience pretty much bore that out.

Thing is, up to about 30 miles per hour it feels a lot quicker. Off the line from traffic signals you’ll keep pace with traffic very easily—even run off and leave a few cars. Handling is diminished a bit from the standard Tucson, while it weighs less in the nose, it has the additional weight of the battery, an additional fuel tank, anf the fuel cell stack to contend with. Thus, curb weight is 4,101 pounds vs. 3294 for a front-drive gas model in Limited trim.

Those 265 miles of range sound good for an electric, until you realize you can’t plug it in and hydrogen-fueling stations are few and far between. This is why Hyundai is limiting availability of the Tucson Fuel Cell to areas it knows have the fueling infrastructure to support it. You also have to “qualify” for the lease; Hyundai vets potential takers to make sure intenders can comfortably live with the ride before lessees take it home.

With that said, Hyundai also covers maintenance costs, fueling costs, and treats you like a member of the royal family when it’s time to service the ride. If you can make a Tucson Fuel Cell vehicle work for your driving habits, it’s a pretty reasonable proposition.

Cons: Limited availability—you pretty much have to live in Orange County California to get one. 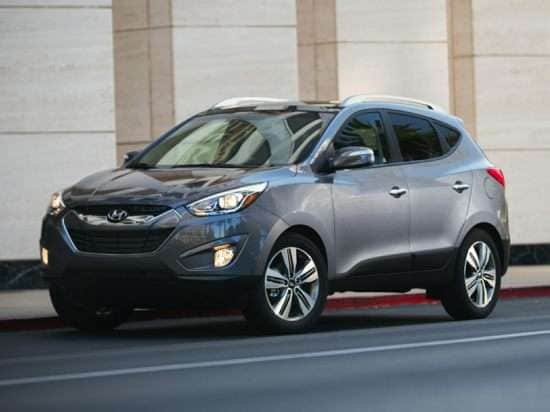