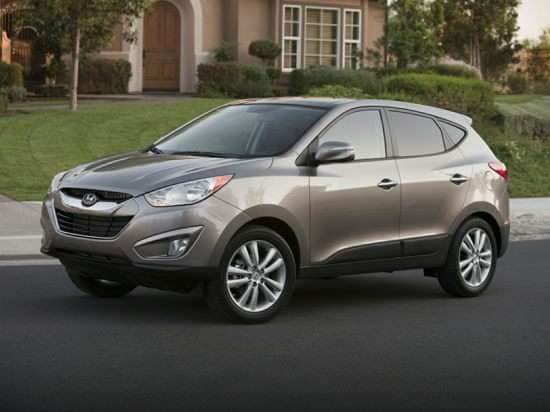 Changes for the 2014 Hyundai Tucson:

In combined driving, the 2014 Hyundai Tucson GLS is rated to return 25 mpg with front-wheel drive and 23 mpg with AWD. Choose the Tucson SE or Limited, and those figures drop to 24 mpg and 22 mpg, respectively.

In crash tests conducted by the National Highway Traffic Safety Administration (NHTSA), the Tucson receives a 4-star overall rating. Note that the SUV doesn’t receive any rating lower than 4 stars in any individual assessment.

The Insurance Institute for Highway Safety (IIHS) gave the Tucson a “Poor” rating for its performance in the tough new small overlap frontal-impact test in 2013. In all other aspects, the SUV rated “Good.” Hyundai has not announced structural changes to address the “Poor” rating for 2014, and official IIHS ratings are not available as this summary is written.

Bluetooth connectivity is standard for all 2014 Tucson models, and the SE trim level includes a reversing camera. Select the Tucson Limited, and this crossover SUV is equipped with Blue Link telematics, Proximity Key passive entry with push-button starting, and a dual-zone automatic climate control system with a clean-air ionizer. The Limited model is also available with a Technology Package that includes a navigation system, a premium sound system, and LED taillights.