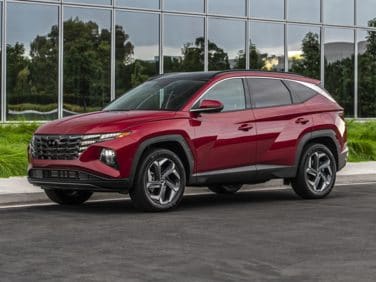 All About Hyundai Tucson

The Hyundai Tucson is a four-door, five passenger compact crossover sport-utility vehicle. With the success of their first SUV, the Santa Fe, Hyundai decided it was time to try their luck in the crossover market as well. While the Santa Fe had originally been based on the Elantra sedan platform, it was moved to a larger, more robust chassis later on in its lifecycle, opening up a spot for a small SUV-like vehicle to take its place. The Hyundai Tucson was such a vehicle, and in 2005 it was introduced to fill the hole in the lineup. The Tucson followed the Santa Fe’s example of maximizing interior room while keeping external dimensions smaller than some of the competition.

The 2008 Tucson benefits from a series of incremental changes which have improved the crossover during the course of the preceding three years. The interior is comfortable for 5 passengers, as the SUV eschews third-row seating in an effort to increase accommodations for both people and cargo. Accents are made of high quality materials that help the Tucson to stand out from other vehicles in its class. Hyundai has also outfitted the vehicle with a great number of air bags, making it a very safe crossover.

Tucson buyers are given a choice between a 2.0 liter 4-cylinder engine or a 2.7 liter V6. The smaller motor produces 140 horsepower, while the V6 generates a healthy 173 horsepower and 178 lb-ft of torque. The 4-cylinder is available with a 5-speed manual, but the only option for the V6 is a 4-speed automatic. On the road, the V6 is clearly much more capable of providing a livable driving experience in the crossover, and while acceleration is not astounding, when all-wheel drive is selected as an option the vehicle feels stable and safe in all weather conditions. The Tucson is not a sporty SUV, but it does provide electronic torque management which is capable of directing power to and from the front and rear wheels as needed. All versions of the crossover also benefit from electronic stability control and traction control.

The V6 and the 4-cylinder provide similar fuel mileage, but with numbers like 18 miles per gallon in city driving, the Tucson drinks fuel like a bigger crossover. This is due in part to the fact that the vehicle is heavy, which contributes to the mediocre 24 miles per gallon on the highway as well.

Most Hyundai SUV’s are well equipped even in base trim, and the Tucson is no exception. The GLS offers power everything, air conditioning, an MP3-capable stereo system and 16-inch alloy wheels. The SE improves the exterior appearance by adding different wheels, more aggressive trim and fog lights. The most lavish version of the Tucson is the Limited, which boasts leather seats, automatic climate control, a cargo cover and body-colored trim for the outside. A sunroof can also be ordered.

While the Tucson may not be ideal for off-road excursions or the stoplight grand prix, it does make a decent family hauler that is budget priced, especially for the amount of standard equipment on tap.

The 2009 Hyundai Tucson is a carryover from 2008. The 2009 Tucson can be ordered in one of three trims: the GLS, the SE and the Limited. The base GLS is outfitted with a 2.0 liter, 4-cylinder engine rated at 140 horsepower and 136 lb-ft of torque. An optional 4-speed automatic can be substituted for the standard 5-speed manual transmission, but the Tucson GLS is restricted to front-wheel drive only. Fuel mileage is reported as 20 miles per gallon in the city and 26 miles per gallon on the highway. The SE makes use of a 2.7 liter V6 engine that makes 173 horsepower and 178 lb-ft of torque. A 4-speed automatic handles the gear shifting duties, and fuel economy is in the range of 18 miles per gallon in city driving and 24 miles per gallon during highway cruising. The Limited has the option of using either of the two engines available in the lower two trim levels along with the 4-speed automatic. Fuel economy for the V6 is identical to the SE, but the 4-cylinder turns in slightly lower numbers due to the extra weight of the more luxurious Limited trim. Both the SE and the Limited can be equipped with four-wheel drive.