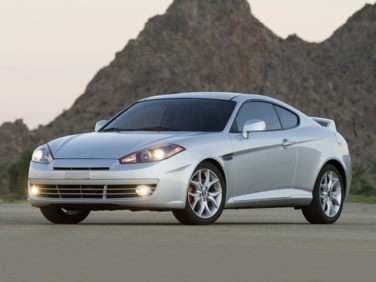 All About Hyundai Tiburon

The Hyundai Tiburon is a two-door, four passenger compact coupe. The Hyundai Tiburon debuted in 1996 as the Korean car company’s first real sports car. A two-door coupe which boasted an aggressive, hatchback styling combined with a larger than usual size, the Tiburon carved out a unique niche in the world of sport compacts. The Tiburon was refreshed a total of four times during its lifespan, and each time the vehicle lost some of its individuality in terms of appearance, but gained increased power and better performance.

The Tiburon displays bodywork that was given a serious update the previous model year. With a less generic, more arched front end, the Tiburon (which means ‘shark’ in Spanish) has gained some sinister appeal. The sports car comes equipped with one of two engines. In base GS trim, a 138 horsepower 4-cylinder engine motivates the relatively light vehicle. GT and SE models see an increase in both power and torque through the use of a 2.7 liter V6 sourced from some of Hyundai’s larger sedans. The V6 makes 172 horsepower and a potent 181 lb-ft of torque and allows the Tiburon to accelerate to 60 miles per hour in 7.2 seconds when equipped with a 6-speed manual transmission. A 4-speed automatic and 5-speed manual are also available, depending on trim level.

The GS is equipped with anti-lock brakes, a sport suspension and 16-inch alloy wheels, all of which help add to the vehicle’s driving experience. Power door locks, windows, and keyless access also make the sports coupe feel like a more expensive car. The Tiburon GT is upgraded with 17-inch wheels, automatic temperature control and cruise control, while the GT Limited trim adds a sunroof and red leather seats. The top of the line SE adds a larger rear spoiler, electronic stability control and traction control to the mix, as well as an even stiffer suspension system. Strangely, the SE reverts from automatic climate control to manual air conditioning in a rare example of Hyundai de-contenting. Interior space in the coupe is acceptable, especially given its small size, but as with most vehicles of this type, the rear seats are designed with short trips in mind.

The Tiburon has always been much better at making drivers feel like they are in a performance car rather than providing actual get up and go. While the 2008 edition enjoys dual exhaust and the requisite rear wing, the vehicle’s lack of power means that driving is reasonably spirited but by no means overwhelming. Buyers will never feel like they are unable to pass on the highway or merge into traffic, but even though the suspension and braking are good, engine performance is merely passable. The 4-cylinder engine provides above average fuel economy with 28 miles per gallon on the highway and 20 miles per gallon around town, but the V6 knocks both of those numbers down to 24 and 17 respectively.

While the Tiburon has served Hyundai well as their first real foray into the world of performance coupes, the vehicle has been discontinued for 2009. There is no word as of yet on its replacement.