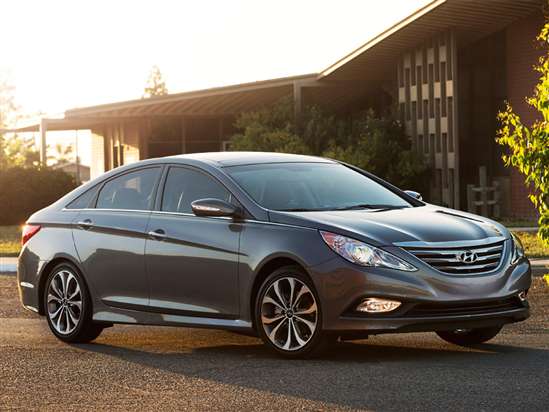 Changes for the 2014 Hyundai Sonata:

The 2014 Hyundai Sonata is sold in GLS, SE, SE 2.0T, Limited, and Limited 2.0T trim levels. A Sonata Hybrid model is also available, but as this summary is written it continues as a 2013 model.

A 6-speed automatic transmission with Shiftronic manual gear selection and an Active Eco system is standard with both engines.

In exchange for the Sonata 2.0T model’s extra oomph, you’re going to need to settle for lower fuel economy. Based on EPA ratings, the turbocharged Sonata gets 25 mpg in combined driving, while the standard Sonata rates 28 mpg.

According to the National Highway Traffic Safety Administration (NHTSA), the 2014 Sonata receives an overall crash-test rating of 5 stars. As this summary is written, the Insurance Institute for Highway Safety (IIHS) has not rated the 2014 Sonata’s crash-test performance. Last year, the car received top ratings in all assessments except for the tough new small overlap frontal-impact test, for which it rated “Marginal.” That result kept the Sonata from earning a “Top Safety Pick Plus” rating.

For the 2014 model year, the Sonata gains several new technologies. All models now have a Driver Selectable Steering Mode with three different steering effort settings, as well as an individual tire pressure monitoring system. Optional for the Sonata SE and standard for the Sonata Limited, a Blind Spot Detection System is new for 2014. These two models can also be optioned with a new, next-generation infotainment and navigation system with an 8-inch touchscreen display.