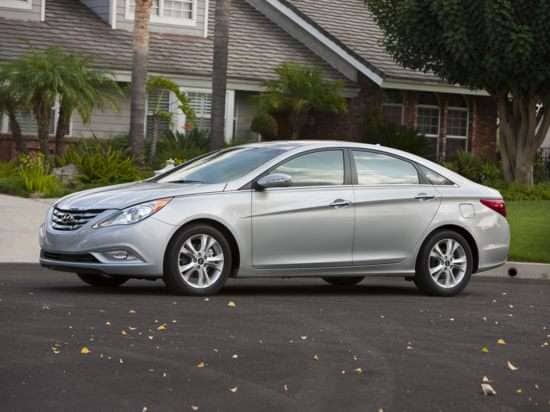 After helping set a new trend for dramatic design in the mid-size sedan segment, the 2013 Hyundai Sonata receives some minor adjustments as it enters its third year on the market. Heated seats, for example, have been added as standard equipment on all models except the entry-level GLS configuration, and the premium Sonata Limited gains an available panoramic sunroof as an upgrade to its standard traditional sunroof. Engineers also have enhanced the powertrain of the 2013 Hyundai Sonata Hybrid to deliver increased efficiency and performance.

The 2013 Hyundai Sonata comes in three basic trim levels, opening with the Sonata GLS that includes standard air conditioning, a six-speed automatic transmission, and Bluetooth technology. Moving up to the Sonata SE brings features like a proximity entry/pushbutton start, heated front seats, a leather-wrapped steering wheel and shift knob, paddle shifters and sport-tuned steering and suspension systems. At the top of the lineup, the Limited welcomes leather seating surfaces, heated rear seats, second-row heating vents, and a 360-watt Dimension audio system. In addition, the SE and Limited Sonatas can be kitted out with Hyundai’s 2.0-liter turbocharged 4-cylinder engine instead of the standard and naturally aspirated 2.4-liter 4-cylinder unit.

The standard powertrain for the 2013 Hyundai Sonata combines the company’s proprietary six-speed automatic transmission and an advanced 2.4-liter 4-cylinder engine with technologies like gasoline direct injection and dual continuously variable valve timing. In the GLS and Limited, the powerplant makes 198 hp and 184 lb.-ft. of torque, while the sportier SE benefits from 200 of the former and 186 of the latter. But there’s also even better news for enthusiasts, in the form of the turbocharged 4-cylinder engine that can transform 2.0 liters of displacement into 274 hp and 269 lb.-ft. of torque in the SE and Limited versions of the Sonata. The 2013 Sonata Hybrid pairs a 2.4-liter 4-cylinder engine to new electrical components, including a higher-output 35-kW electric motor and more powerful 47 kW lithium-polymer battery pack.

The 2013 Hyundai Sonata posts an EPA line of 24 mpg city/35 mpg highway/28 mpg combined with its standard powertrain, and its fuel-economy performance only slips slightly with the turbo model; even with its additional power, the car can achieve 22 mpg city/34 mpg highway/26 mpg combined. As for the 2013 Sonata Hybrid, it can now reach 36 mpg city/40 mpg highway/38 mpg combined, representing increases of 2 mpg/1 mpg/2 mpg over the 2012 model.

The 2013 Hyundai Sonata retains its Top Safety Pick status from the Insurance Institute for Highway Safety (IIHS), although it received a “marginal” grade in the new small-overlap test that the institute is just now adding to its evaluation program. In the New Car Assessment Program run by the National Highway Traffic Safety Administration (NHTSA), the Sonata scored five stars across the board to earn an overall five-star score from the government.