The 2014 Hyundai Sonata Hybrid will benefit from a few final upgrades as the current-generation Sonata enters its last model year, including a standard rearview camera system, enhanced audio with a color touchscreen and HD Radio, and LED dome lights. MSRPs rise at the same time, however, with the new starting point for the car increasing by $350 to an even $26,000. The cost of the uplevel 2015 Hyundai Sonata Hybrid Limited also rises, to $30,750, which reflects a bump of $250.

The change also affects the overall pricing hierarchy in the mid-size hybrid-sedan segment. On the one hand, the 2014 Hyundai Sonata continues to own significant price advantages against the Ford Fusion Hybrid ($27,280) and Honda Accord Hybrid ($29,155), but on the other, it's now surpassed the Kia Optima Hybrid ($25,900) and is nearly as expensive as a Toyota Camry Hybrid ($26,330).

It will be interesting to see if there's any affect on sales, too. Despite lower EPA marks than its Ford, Toyota and Honda rivals, the Sonata was the only member of its segment to see a sales gain in February. Combining efficiency info from the EPA and sales data from the HybridCars.com Dashboard, here's a snapshot of the category from February:

2015 Hyundai Sonata: The Next Generation

2015 Hyundai Sonata: The Next Generation

As mentioned, Hyundai also recently showed off renderings of the next-generation 2015 Sonata, which will mark the first complete overhaul of the brand's mid-size sedan since it helped bring Hyundai to the attention of mainstream customers in 2009. The new version will make its world premiere later this month in South Korea, then have its U.S. debut at the New York International Auto Show in April. 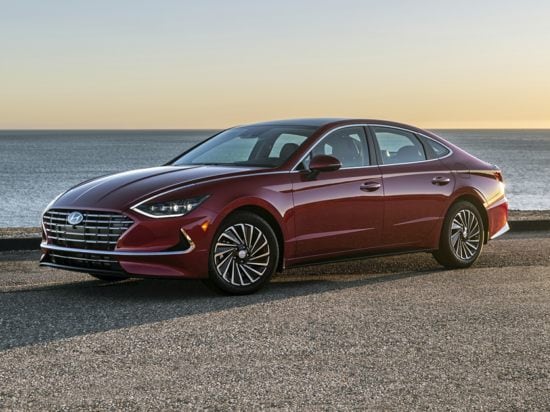