If at first you don't succeed, well, there's always the second-generation model to look forward to. After a rocky start with its first gasoline/electric sedan, Hyundai looks to get back in the good graces of eco-conscious car buyers with the 2016 Hyundai Sonata Hybrid, which seeks to banish the memory of the balky, not-that-thrifty edition of the car that preceded it.

A full redesign of its hybrid system, combined with a brand new platform, have given the Sonata Hybrid the ammunition it needs to once again become competitive with other affordable battery-assisted sedans like the Ford Fusion Hybrid, the Honda Accord Hybrid, and the Toyota Camry Hybrid. In fact, aside from a few puzzling missteps in the tech department, there's much to like about the least-thirsty version of Hyundai's mid-size sedan.

The 2016 Hyundai Sonata Hybrid doesn't throw out the brand's established battery-assisted playbook (drivetrain setup follows the same general principles), but merely makes a number of key revisions aimed at improving its execution. Specifically, the Sonata Hybrid has ditched last year's 2.4-liter four-cylinder mill in favor of a 2.0-liter unit that has been upgraded to direct fuel injection. Also new: the electric motor that sits between the gas engine and the traditional six-speed automatic transmission, a design that displaces the gearbox's torque converter.

You're looking at 159 horsepower and 154 lb-ft of torque from the 2.0-liter engine, while the electric motor provides 51 horsepower and 151 lb-ft standing on its own. After all the hybrid voodoo is performed, total system output for the Hyundai stands at 193 horsepower - a minor drop compared to 2015's 199 ponies.

Whereas the hand-off from electric motivation to gas-powered assistance in the original Hyundai Sonata Hybrid was at best abrupt, the 2016 edition of the car has completely erased this roughness in character, allowing the car to harness a more traditional driving experience made possible by the decision to shun a continuously-variable transmission. The smoother 2.0-liter motor and improved hybrid system management software have completely transformed the Hyundai's personality, and while total output from the Sonata Hybrid has dropped marginally, I was unable to detect any real performance disadvantage in regular driving as compared to the departed model.

The Hyundai Sonata Hybrid also deserves praise for the sheer aggressiveness of its battery-only operation. Around town the car strives to remain in EV mode as long as possible, and as mentioned above the transition between its various drive modes is near-seamless. Even on the highway, the Hyundai would often switch over to electric operation if I was cruising at a steady speed - not just when coasting down a long hill - with impressive regularity.

Fuel Efficiency Has Seen A Boost

Fuel Efficiency Has Seen A Boost

The 2016 Hyundai Sonata Hybrid's willingness to cut in the electrons as often as possible has helped the car post an improvement in its EPA efficiency numbers, but that's not the only reason the sedan is suddenly sipping less fuel. While the older hybrid's 2.4-liter engine featured an Atkinson-cycle design, the direct injection system fitted to the smaller-displacement 2.0-liter keeps power nearly on par while shrinking the size of the motor significantly.

Hyundai claims that the Sonata Hybrid will deliver up to 40-mpg in stop and go driving and 44-mpg on the highway (depending on trim level, with top-tier models dropping a single mile per gallon from each respective measure). This represents an improvement of five and four miles per gallon as compared to the original Hyundai hybrid. In combined driving through an urban landscape matched with the hilly secondary roads of northern Vermont, I managed to squeeze 30-mpg from the Sonata, a very satisfying number in the real world, but indicative of just how hard it is to meet manufacturer's claims at the fuel pump.

There's A Plug-In Model, Too

There's A Plug-In Model, Too

If you're looking for the ultimate in automotive electrification from Hyundai, then the 2016 Sonata Hybrid is also available in a plug-in edition. Although I didn't have the chance to test it out, the Hybrid PHEV provides a much larger battery that facilitates as much as 24 miles of electric-only driving at speeds of up to 75-mph. In addition to its ability to charge up using a 120-volt or 240-volt plug (in less than three hours for the latter), it also features a 'charge' mode that can use the engine to top up its EV power source. This is particularly useful when driving on the highway, as engaging Charge mode lets you bank EV miles for use around town later on. Strangely - or maybe it's because of the extra weight - the plug-in edition of the Hybrid isn't quite as efficient in combined driving, posting a 40-mpg rating versus the 42-mpg score for the standard version of the car.

Despite significant improvements in the smooth character of the 2016 Hyundai Sonata Hybrid's drivetrain, not every aspect of its hybrid system put in the same sparkling performance during my time with the car. Specifically I found myself flummoxed by the Sonata Hybrid's brakes, which defied my ability to properly modulate them at almost any speed. Occasionally when I applied steady, constant pressure to the Hyundai's pedal, there would be a moment where the regenerative system would switch off and the standard brakes fully engage, seemingly at random. This led to an unwanted jerk when slowing down, one that was entirely unpredictable and utterly unwelcome.

A few other weird quirks revealed themselves during my time with the car, including a cruise control system that would speed up and then slow down of its own accord while traveling over completely level ground (so much so that I had to verify twice that I wasn't dealing with an adaptive system responding to distant traffic), and a Bluetooth system that was reluctant to fully commit to connecting with my Android device. These ghosts in the machine are unusual for a Hyundai, which made them stand out even more while the Sonata Hybrid was in my care.

Well-Appointed Interior, For The Price

Well-Appointed Interior, For The Price

The 2016 Hyundai Sonata Hybrid comes in two trim levels: the SE and the Limited. Each model has its charms, with the Limited really stepping things up by way of its front and rear heated seats (with additional seat cooling feature for forward occupants), leather upholstery, wood trim throughout the cabin, a heated steering wheel, and more access to features such as a navigation system, a panoramic sunroof, and advanced safety gear (including an actual adaptive cruise control system, a lane departure warning system, and a forward collision warning system). Hyundai has also carved out more trunk space for 2016 by moving the battery lower in the car, giving the sedan better practicality than the model it replaces (13.3 cubic feet of storage space in total).

The price gap between the two models isn't that great, with the Limited checking in at $4,100 more than the $26,000 you'll have to shell out when buying the Sonata Hybrid SE. Both models are within spitting distance of their mid-size hybrid sedan rivals from the usual cast of suspects (with a slight equipment edge going to Hyundai, as usual, when comparing the cars side-by-side).

The 2016 Hyundai Sonata Hybrid has adopted the same muted styling cues as its gas-only counterpart did the year before, which is perhaps fitting given the car's less-than-engaging ride. This isn't necessarily a criticism - few buying a mid-size four-door at an affordable price are seeking thrills behind the wheel, and that goes double for anyone interested in a hybrid - but it's worth noting that the Sonata Hybrid prioritizes comfort over cunning when it comes time to deal with twistier roads. A pleasant side effect of the car's efficiency-first personality trait is a very quiet cabin: lowering the Sonata's coefficient of drag compared to the departed model has also reduced wind noise, a trait that's further buttressed by improved sound insulation throughout the passenger compartment.

The Hyundai Sonata Hybrid does come with the ubiquitous 'Sport' button that is now required on almost every automobile regardless of its intended purpose, but I assure you that in this case it's largely decorative. In Sport mode the Hyundai's transmission does feel somewhat more willing to downshift, and there's also a smidgen of extra throttle response to be had, but you'll want to plan your passes carefully in the Sonata Hybrid so as not to run out of the sedan's limited steam at a crucial moment when facing oncoming traffic.

Regardless of how improved the 2016 Hyundai Sonata Hybrid might be, the reality is that very few family car buyers are all that interested in a mid-size hybrid sedan. The entire hybrid segment - including SUVs, crossovers, hatchbacks, and four-door daily drivers - accounts for roughly three percent of the entire automotive market, and sedans like the Sonata Hybrid are a tiny slice of what is already an abbreviated segment. Part of that has to do with cost: the most affordable Sonata Hybrid (the SE) is still $5,000 more than the entry-level, gas-only model, and while it might provide a decent increase in around-town fuel efficiency, on the highway the difference is more muted. Then there's the question of performance: a high-spec turbocharged Sonata sedan is much quicker and a bit more fun to drive than a comparably-priced Hybrid Limited model, which makes the battery-assisted model a harder sell to anyone who isn't solely focused on MPGs. 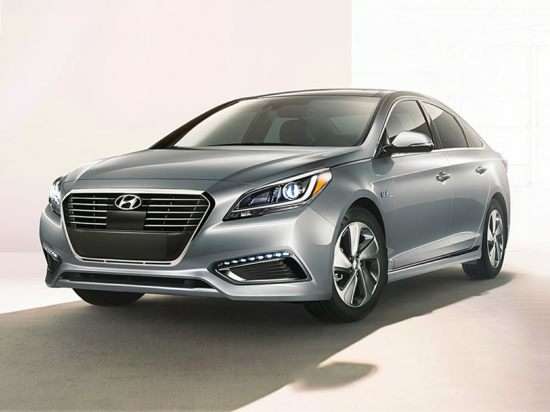