While the Hyundai Sonata Hybrid is on its way to posting a fairly impressive first year on the market, it’s going to face much stiffer competition in the 2012 model year—but at least it will do so while enduring just a minor bump in cost. Hyundai essentially held the line on the car’s MSRP, inflicting just $55 worth of price increase to bring its 2012 starting point to $25,850; that’s roughly a .2 percent difference.

Other differences for 2012: Hyundai’s Blue Link infotainment and connectivity system will be standard across the Sonata Hybrid lineup, while a new cabin upgrade package debuts as well. For 2011, leather interior accents were only available to customers who stepped up to the vehicle’s “Ultimate Package,” which ultimately added $5,000 to the Sonata Hybrid’s bottom line. The new trim package is down to $1,500 and delivers leather seating surfaces, steering wheel and shift knob; heated front seats and heated rear-seat bottom cushions; and an auto-dimming rearview mirror with HomeLink and compass.

Sonata Hybrid: The Year in Review

Sonata Hybrid: The Year in Review

All that’s the good news, and, as mentioned above, the vehicle’s sales numbers are good news as well—although one does have to put its performance into context. The Sonata Hybrid began becoming widely available just as the overall supply of hybrid vehicles was being squeezed by the spring disasters in Japan. Thus, in June, when Hyundai first began breaking out hybrid numbers, the Sonata earned 1,422 sales and was the second-best-selling hybrid in the U.S., trailing only the Toyota Prius. But that month also saw Prius sales drop off by 60.5 percent as compared to June 2010, the Ford Fusion Hybrid slip by 51.8 percent, and the Honda Insight fall by 31.5 percent. In fact, overall hybrid sales were down by 41.4 percent in June. All of which is only to say the Sonata Hybrid enjoyed some good timing.

That trend continued in July and August, when Sonata Hybrid sales spiked above 4,000 units each month, even though the marketplace was turning away from high-efficiency products in general and pushing up the volume on the truck side of the industry.

But once Toyota’s hybrid products—including those from Lexus—began returning to full production, the Sonata Hybrid began losing steam. After two more months right around 2,000 sales, the car fell to 1,723 deliveries in November, and also fell out of its No. 2 place on the hybrid sales list for the first time in six months. Passing it: the Lexus CT 200h.

And speaking of Toyota’s hybrid products, there’s now one in particular that is likely to push the Sonata yet further down the list: the all-new 2012 Toyota Camry Hybrid. When the Camry was completely redesigned for the 2012 model year, engineers put a lot of effort into upgrading the hybrid. The 2011 Camry hybrid, remember, made for a pretty tough sell, especially against the Sonata. The Toyota was over $1,200 more expensive than the Hyundai, while returning substantially lower EPA numbers of 31 mpg city/35 mpg highway/33 mpg combined. With those marks, the previous Camry Hybrid was down 4 mpg/5 mpg/4 mpg compared to the Sonata Hybrid’s ratings of 35/40/37—while also leveraging about 20 fewer combined horsepower, too.

But it’s a very different story for 2012. Not only does the current Camry Hybrid benefit from the standard model’s highly effective makeover, but the base model’s MSRP was slashed by $1,150; its combined power output was raised to 200 hp—and now trails the Sonata by just 6 hp; and, courtesy of a re-engineered hybrid powertrain, it now surpasses the Sonata Hybrid’s city and combined EPA ratings by a rather healthy amount. The Camry Hybrid now rings up an EPA line of 43/39/41 mpg; that creates 8 mpg and 4 mpg advantages for the Toyota in city and combined numbers, with the car being just 1 mpg behind in the highway category.

Now, it’s worth pointing out that Hyundai explicitly engineered the Sonata Hybrid’s powertrain to focus on improved highway fuel efficiency, since most drivers spend most of their time driving on the highway. But, obviously, the Sonata Hybrid advantage here is now practically nonexistent.

It’s been a long time since a Hyundai product has had as much trouble matching up with the competition as the Sonata Hybrid does with the Camry Hybrid. The two vehicles are very similar in price, power and content, but the Toyota has a clear advantage in fuel efficiency—a hybrid’s raison d’être. The situation will make a Hyundai response—or lack thereof—well worth watching. 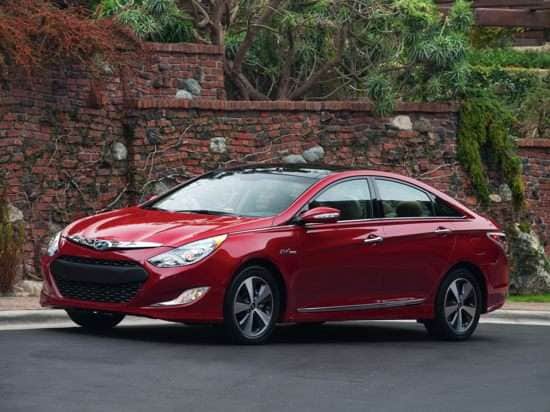