Wearing a candy red finish and packing a sweet new performance upgrade, Blood Type Racing's 2014 Hyundai Genesis Coupe was previewed recently just ahead of its upcoming SEMA debut. The car will then get a real-world premiere on November 4, during Hyundai's official press conference for the 2014 Specialty Equipment Market Association show in Las Vegas.

Said Sam Lee, product manager for Blood Type Racing Inc.: “Our focus on this vehicle was to build on the impressive performance abilities of the Genesis Coupe and help the growth of the aftermarket tuner community. It’s easy to add lots of power to an engine, but we engineered all other aspects of the vehicle—cornering and handling, stopping power, and visual appearance—to complement the massive horsepower we’re now getting from the engine. We’ve engineered a true, total package Genesis Coupe.”

Customers should note that the car further serves as a sort of a swan song for the turbocharged 2014 Hyundai Genesis Coupe, since the 2015 model will drop that powerplant and only offer a naturally aspirated 3.8-liter V6 that makes 348 hp and 295 lb.-ft. of torque. With that unit and an MSRP of $26,750, the 2015 Hyundai Genesis Coupe began arriving in dealerships earlier this year. 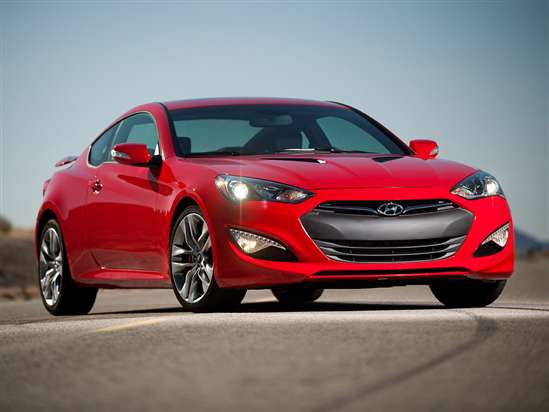