Introduction
By Brian Chee
Think back, say ten years ago. And imagine, back then, pulling up at your little one’s school in a Hyundai minivan.

Oooh, how the mothers would talk.
No amount of cookie dough donations would rid you – and your family – of the nasty poor family reputation in suburbia. Pretty soon there would be care packages, hand-me-downs, and job offers at “my husband’s” plant…

Things sure have changed since then. Today, pull up in a Hyundai minivan and the mothers’ tongues will still wag – this time, however, it would be about how smart you are, despite your public school education. Hyundai’s come a long way, indeed, and the debut of its new 2007 Entourage minivan at the 2006 Chicago Auto Show will serve to cement the Korean company’s reputation as a major, reputable automaker in the U.S.

The 2007 Hyundai Entourage is a pretty minivan rolling out right when Ford and GM are pulling back in this segment, leaving the small yet important group of family-minded buyers to imports and Dodge Caravans. Hyundai’s family conveyance stands a good chance of being considered an excellent choice for those looking to save a little money over segment leaders like the Honda Odyssey and Toyota Sienna, and who don’t like the features and/or styling of the Kia Sedona. Of course, that’s a little disingenuous: the Entourage is Hyundai’s version of Kia’s successful Sedona. At first glance that may seem silly – to sell essentially the same minivan with two different brands – but heck, Chrysler, Ford, and GM have been doing it for years. Okay, so maybe that’s not such a hot example. Shoppers can rest easy, however, in the knowledge that there will be plenty of differences between the Entourage and the Sedona. Similarities, however, will be the things people love about Korean-built cars, namely the price, the warranty and their increasing reputation as quality-built vehicles.

Someone once said the minivan segment was dead. Hah. It was only taking a nap, and it’s back now, with a strong import vibe that’s only getting stronger with the introduction of the 2007 Hyundai Entourage. For Ford and GM, this minivan is bad news of the worst kind: obsessed with losing market share to Japanese automakers such as Honda and Toyota, the two domestic automakers have recently all but conceded the minivan market to the likes of the Odyssey and the Sienna. Now, here comes Hyundai/Kia, with the impressive Entourage and Sedona. Should the Hyundai Entourage get a warm reception from American families, it will make regaining minivan competitiveness all but impossible for Ford and GM, and put pressure on DaimlerChrysler’s Grand Caravan.

All Hyundai Entourage minivans get a 3.8-liter V6 engine that produces 242 horsepower and 251 lb.-ft. of torque, and is mated to a five-speed automatic transmission with Shiftronic manual control. The Entourage rides on the same minivan platform as the Sedona, with a 118.9-inch wheelbase that is longer and wider than the competition, according to Hyundai. Hyundai engineers also claim that the Entourage has the tightest turning radius in its class, a big deal for minivan drivers. Steering is handled by a speed-sensitive rack-and-pinion system, and the Entourage rides on a four-wheel independent suspension system.

Perhaps most notable about the Entourage, however, is the long list of standard safety features. All Entourages get a bevy of passive and active safety systems, including side impact and side curtain airbags, traction control and more. Just these two safety devices – traction control and side curtain airbags – can make any car significantly safer to drive.

The 2007 Hyundai Entourage looks to offer most of the features a minivan family requires. For example, there’s a folding center tray table with four cupholders, folding sideview mirrors, a tilt steering wheel, optional power adjustable pedals, power dual rear sliding doors, power windows, and an adjustable conversation mirror. The interior has a two-tone color scheme with wood grain or metal grain accents. Leather seats are standard in the Limited model, as are a power tailgate, heated front seats, and an electroluminescent instrument cluster. A rear-seat entertainment system with an eight-inch LCD monitor, backup warning sensors, and a premium audio system with surround sound are also available. The Entourage also features flip-and-fold second-row seats, and a hiding third-row seat with a 60/40 split fold-into-the-floor design.

Ford, with its aging Freestar, may as well close that plant in addition to all the others that are getting shut down. General Motors – that Theta platform on which you’re building a new generation of crossover vehicles better be pretty darn good, ‘cause if it’s not, or if the features and safety equipment fall short compared to the likes of the 2007 Hyundai Entourage, well, gee, maybe you can make up the difference in Tahoe sales. Based on our drive of the Sedona and the price and features of the Entourage, we’d say that Kia and Hyundai are in the minivan game big time.

The 2007 Hyundai Entourage will be available this spring. Sticker price for a well-equipped Entourage is about $23,795. The Entourage comes in three distinct trim levels: The well-equipped GLS, high-value SE, and premium Limited. 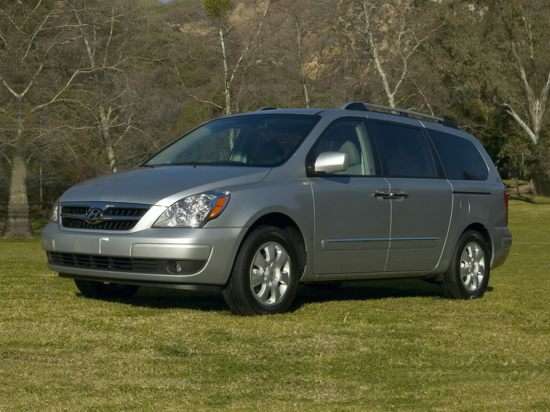