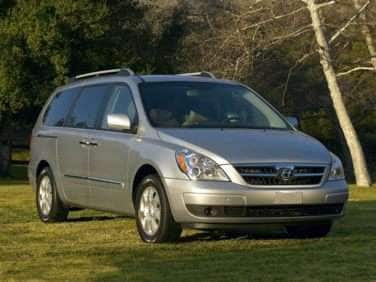 All About Hyundai Entourage

The Hyundai Entourage is a four-door, seven passenger minivan. Traditionally, Hyundai has been a company which has focused on passenger cars, letting other Asian manufacturers slog it out in the battle of the minivans and SUV’s. However, with the company’s resurgence at the beginning of the 2000’s came a more urgent desire to compete in a wider number of market segments. This spawned a proliferation of sport-utility vehicles, and eventually led to the company borrowing a minivan platform from corporate stable mate Kia in 2007, re-badging the Kia Sedona as the Hyundai Entourage.

The 2008 Hyundai Entourage is identical to that of the previous model year. The base Entourage GLS is very well equipped, with triple-climate control to ensure that passengers the entire length of the van are comfortable, power door locks and windows, and a third row of seating which folds into the floor. If desired, buyers can also opt for power sliding doors, a parking assist backup warning system and of course a DVD player for rear-seat passengers. Moving up to the Limited trim provides heated leather seats and almost all of the optional equipment that can be ordered for the GLS. A sunroof can also be installed.

The interior of the Entourage is fairly unique, with a spaceship-like center dash console that houses not only the heating and stereo controls but the automatic shifter as well. A large center console with 4 cup holders and a hollow square section in the middle provides driver and passengers with an excellent spot for storing a variety of items. Second-row bucket seats can be individually moved forwards and backwards to better accommodate taller passengers or cargo hauling needs. The third row bench is not as well appointed when it comes to leg room, but Hyundai has intended it to be used primarily for children. With the final row of seating folded down, 80 cubic feet of cargo space can be used to stack as many hockey bags or groceries as needed.

Each version of the front-wheel drive Entourage is powered by the same 3.8 liter V6 engine, which produces 250 horsepower and 253 lb-ft of torque. This is more than enough to haul the seven-passenger van over hill and dale with ease, and the 5-speed automatic transmission with Shiftronic manual control is also up to the task of providing decent performance. The van’s suspension is tilted more towards a comfortable ride than responsive handling, but chances are that most minivan drivers aren’t expecting sports sedan performance out of their people mover. The Entourage’s fuel economy is a dark spot on an otherwise cheery report, with the van only achieving a low 16 miles per gallon in city driving – similar to a mid-size SUV. On the highway, the situation improves to 23 miles per gallon.

While the Entourage may share a heavy amount of Kia DNA, Hyundai still backs it with the same comprehensive warranty that comes with all of their vehicles. With an interior which feels comfortable and upscale in Limited trim combined with the usefulness of fold-flat seating, the Entourage might be the start of something good for Hyundai.

The 2009 Hyundai Entourage is a carryover from 2008. The 2009 Entourage comes in either GLS or Limited trim. Both versions of the minivan have the same 3.8 liter V6 engine installed under the hood. This unit produces 250 horsepower and 253 lb-ft of torque, and is shifted through a 5-speed automatic transmission that also provides manual control over gear selection. Fuel mileage for each trim is rated at 16 miles per gallon around town and 23 miles per gallon out on the highway.