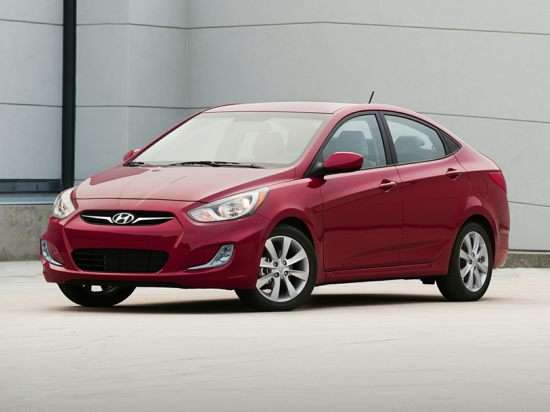 Changes for the 2014 Hyundai Accent:

Hyundai upgrades the 2014 Accent with a standard driver’s side blind-spot mirror, a turn signal that blinks three times to indicate a lane change, sliding sun visors, and a revised audio system with improved voice recognition technology. The Accent Sedan’s Premium Package and the SE Hatchback gain a tilt/telescopic steering wheel, auto-up operation for the driver’s window, and new projector-beam headlights with LED accents. Buyers of the SE Hatchback can opt for a B&M Racing sport shifter…because people buy the Accent for its performance?

Hyundai offers the 2014 Accent as a 4-door sedan in GLS trim or as a 5-door hatchback in GS and SE trim.

Maybe a B&M Racing sport shifter isn’t quite as far-fetched as our wisecrack above would indicate. This is one of the most powerful cars in its class, equipped with a 1.6-liter 4-cylinder engine whipping up 138 horsepower. That’s good for a car that weighs less than 2,500 pounds in base trim. Each version of the Accent includes a 6-speed manual gearbox, with a 6-speed automatic transmission available as an option. The automatic includes manual shift capability and an Eco driving mode.

No matter which transmission you choose, the 2014 Hyundai Accent gets 31 mpg in combined driving, according to the EPA.

The National Highway Traffic Safety Administration (NHTSA) gives the 2014 Accent an overall crash-test rating of 4 stars. Note, however, that the NHTSA rates rear-seat passenger protection at 3 stars in the side-impact crash test, and cites a safety concern with regard to elevated injury recordings for the crash-test dummy seated in that location.

The Insurance Institute for Highway Safety (IIHS) also finds side-impact protection lacking, giving the Accent an “Acceptable” rating in this regard, rather than the “Good” rating it receives in most other tests. In the small overlap frontal-impact test, which measures protection in the event the car strikes a tree, pole, or oncoming traffic on the left front corner, the Accent gets a “Poor” rating, like nearly every other subcompact model on the market.

To get Bluetooth on the Accent GLS Sedan, you must order the Premium Package, which costs $1,400 and adds a whole bunch of other stuff that makes the Accent look and feel less like it fell out of a box of Cracker Jacks. But, at least you can get Bluetooth for the GLS model. The GS Hatchback is not available with this feature.

What Hyundai does include for every 2014 Accent is satellite radio, a USB port, iPod compatibility, and an auxiliary audio input jack. The world is moving on, though, and fast, especially for younger buyers most likely drawn to the Accent’s low price. Hyundai needs to do better.