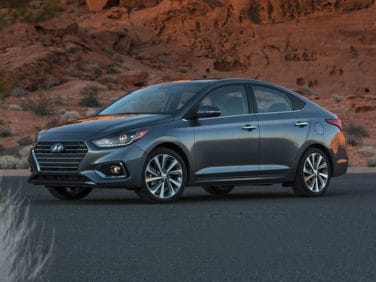 All About Hyundai Accent

The Hyundai Accent is a three-door, five passenger compact hatchback, and a four-door, five passenger compact sedan. The Hyundai Accent was one of the first weapons deployed by the Korean company during the long battle to rehabilitate their image. In the early 90’s, Hyundai was known more for their bargain basement pricing and cheaply-built cars than they were for reliability or quality. The Accent was meant to replace the Excel, which had been the first product ever sold in North America by Hyundai, and it debuted in 1995. The Accent heralded a turning of the tide for the company, with a newfound focus on engineering and design helping Hyundai capture significant market share over the next decade.

That being said, the Accent has always been positioned as basic transportation, and the 2008 model is no different. Riding on a third generation platform that was last re-designed in 2006, the Accent is a thoroughly modern car. Each version of the Accent uses the same 1.6 liter 4-cylinder engine which produces 110 horsepower and 106 lb-ft of torque. A 5-speed manual transmission is standard equipment, while a 4-speed automatic is optional.

The Accent can be ordered in one of three trim levels. The GS and SE are 3-door hatchbacks, with the GS representing the most stripped down version of the car that is available. Still, it does offer extensive air bag protection, a tire-pressure monitoring system and a folding rear seat. Upgrading to the SE adds anti-lock brakes, air conditioning, power door locks and windows and 16 inch-alloy wheels to replace the 14-inch steelies found on the GS. Remote keyless entry and upgraded exterior trim are also on the list of improvements. The Accent GLS is a 4-door sedan, and it combines most of the features found in the GS with the added bonus of an MP3 and XM satellite radio-ready stereo system and larger interior volume.

While the Accent is a compact car, interior room is good, with the hatchback being only slightly smaller than the sedan in terms of passenger accommodations both front and rear. While the vehicle is relatively devoid of luxury, excellent sound deadening and attention to detail in terms of interior fit and finish help to raise the vehicle above its market segment. The 4-cylinder engine needs all of its 110 horsepower to keep up with the flow of traffic, but the vehicle is comfortable with merging onto busy highways and doesn’t have any issues taking off from stoplights. The small engine also provides excellent fuel economy, with a consumption figures of 27 miles per gallon in the city and 32 on the highway when equipped with the manual transmission. Braking is acceptable, especially when the optional anti-lock brakes are installed, although the 2008 no longer wears discs at all four corners – the rears have reverted to drums. The suspension is not designed for aggressive driving, but it does keep the car pointed in the right direction over broken pavement and provides a reasonably comfortable ride.

The Accent is a safe, bargain priced driving appliance that is worth consideration alongside rivals from Honda, Toyota and Chevrolet. The 2008 Hyundai Accent also comes with an attractive 10 year / 100,000 miles powertrain warranty that should spell worry-free driving for the entire ownership of the vehicle.

The 2009 Hyundai Accent is a carryover from 2008. There are three different trim levels available for the 2009 Accent: GS, SE and GLS. The first two come in 3-door hatchback form, while the latter is a 4-door sedan. Each version of the Accent is equipped with the same 1.6 liter, 4-cylinder engine that is tuned to provide 110 horsepower and 106 lb-ft of torque. A 5-speed manual transmission is standard equipment, while a 4-speed automatic remains available as an option. Fuel economy for the Accent when mated with the 5-speed is rated at 27 miles per gallon in the city and 33 miles per gallon on the highway.