luxury vehicles can offer some of the best bargains when it comes to the secondhand market. While the initial purchase price of a high-end automobile, pickup truck or SUV can be quite costly, these vehicles often depreciate much faster than less expensive options. One of the primary components of used luxury price drops is that for some, the appeal of a high-dollar automobile is the exclusivity that goes with knowing they have paid more for their car than most other people could afford. This attitude leads to the inflated prices seen in the showroom that don't necessarily reflect the value of the sum of a vehicle's parts. Once the sheen has worn off and next year's model has come out, these expensive toys are dumped in favor of the new edition. The used market is then able to judge the vehicle based more on its merits than its hype.

Still, the drawing power of a luxury brand is strong for those searching for a used bargain. The idea of owning a high class car at an affordable price has enticed many a buyer to forsake a new economy car for a slightly used premium vehicle. Luxury trucks also fall under this heading, particularly domestic vehicles, and it is not uncommon to see Lincoln Navigators and Cadillac Escalades in the driveways of those who were initially shopping for brand new Yukons or Explorers.

HUMMER has built a very successful image as the truck of choice for the upwardly mobile, and their status as disposable status symbols has lead to a glut of used suv's and pickups on car lots across America. These vehicles offer the same glamour and build quality of a new HUMMER but at a fraction of the original price. This article takes a look at three of the least expensive vehicles in the current HUMMER lineup and holds them up against their used equivalents in order to find out where the best value lies. The prices quoted in this article are intended to reflect low mileage examples in excellent shape. However, it is normal for there to be fluctuations in vehicle cost depending upon the market the vehicle is located in and its overall condition, making these numbers most useful as a starting point for negotiating and evaluating a possible purchase.

The 2009 HUMMER H3 is a compact sport-utility vehicle that is positioned to compete with other luxury trucks like the Land Rover Freelander and the BMW X3. Starting out at $34,000, the H3 comes standard with a 239 horsepower, 3.7-liter inline 5-cylinder engine and a 5-speed manual transmission. Four-wheel drive, traction control and anti-lock brakes round out the vehicle's driver's aids, while the interior is appointed with cloth seats, power windows and door locks and a driver information center for monitoring vehicle functions.

2006 was the first year for the H3, and the original baby HUMMER shares many features with the newer version. Under the hood, the 2006 HUMMER H3 makes use of a slightly smaller and weaker 3.5-liter I5 that produces 19 fewer horsepower. However, the transmission and all-wheel drive system are the same. In terms of appearance, there's no real way to tell the vehicles apart - like most HUMMERs, the rough and ready styling has carried over from year to year. Compared to the base model, interior appointments are also largely the same.

With the only difference between the 2006 and 2009 HUMMER H3's being the new and improved engine, looking at the pricing of used H3's becomes somewhat of a revelation. Vehicles with less than 20,000 miles can be found for around $20,000, which represents a hard to ignore $14,000 dollar savings over new. Some of these vehicles still bear their original warranties, making them safe bets for maintenance-wary buyers.

If a 20 horsepower difference is not a big deal, and if the 2006 HUMMER H3 being looked at is in good condition and hasn't turned too many miles on the clock, buyers would be much better off pocketing the keys for the used edition of the SUV over the new one. $14,000 is close to half the original purchase price, and that kind of money can go a long way if drivers can keep it in their pocket instead of depositing it in the dealership's bank account.

With a base price of $63,000, the 2009 HUMMER H2 is certainly aimed at a very specific clientele. There are not many full-size SUV enthusiasts out there with that kind of money to throw at a truck, but for those who are interested the 2009 H2 provides them with an almost 400 horsepower, 6.2-liter V-8 engine that also churns out a sizable 415 lb-ft of torque. The HUMMER H2 also comes with the legendary off-road capabilities that the brand is known for, wrapped in a package that includes a secondary heating and cooling system for rear passengers, an in-dash CD changer, 8-way power leather seats and satellite radio.

The 2005 HUMMER H2 stands toe-to-toe with the 2009 edition of the vehicle in every area except for power. While they share the same engine, the older SUV has to make due with a configuration that comes in at 325 horsepower, putting it at a significant disadvantage to the 2009. This power difference most likely won't manifest itself when tackling an off-road trail, but it will be noticeable in highway passing and acceleration from a stop. When it comes to interior luxuries, the 2005 H2 doesn't take a backseat to the most recent vehicle, which helps it appeal to those who are more interested in comfort than performance.

When it comes to price, it is clear that the emergence of a newer, more powerful H2 has helped drive down the cost of secondhand ownership. A 2005 HUMMER H2 with between 10,000 and 20,000 miles is easy to find at just under $30,000. This makes the price of the vehicle less than half what it would cost to drive a 2009 H2 off a dealer's lot. 75 horsepower notwithstanding, this turns the 2005 HUMMER H2 into one of the best buys in the used luxury suv market and a clear winner for frugal buyers when compared to a new truck.

For those who need an SUV that also doubles as a pickup truck, the SUT edition of the 2009 HUMMER H2 fits the bill nicely. For $62,000 the SUT provides all of the same features as the Hummer H2 SUV but throws in the innovative Midgate system which allows drivers to configure the H2 as either a 4 passenger sport-utility vehicle or a 2 passenger, long-box pickup. The vehicle also provides a weatherproof cover for cargo that is too sensitive to be exposed to the elements, helping to make it a versatile solution for anyone wanting a luxury truck but also needing that extra hauling capacity.

The HUMMER H2 SUT debuted a few years after the H2, hitting the market for the first time in 2005. Like the current H2 SUT, it shared identical specifications when compared to the SUV version of the vehicle, with a few extra goodies thrown in to help sway buyers into trying a new kind of vehicle. This means that compared to the 2009 H2 SUT, the 2005 also suffers from the same power differential that keeps it behind the newer truck in a drag race. However, the news when it comes to pricing for the used SUT is somewhat cheerier. While low-mileage editions of the truck are harder to find, for buyers willing to go as high as 25,000 miles prices hover slightly above the $30,000 mark, giving the 2005 Hummer H2 SUT the same 50% price reduction as its standard SUV cousin.

Most buyers who opt for the pickup version of the HUMMER H2 plan to put that hauling capacity to good use, and despite their best intentions, this means that inevitably the cargo area will begin to show signs of wear. While this can be discouraging for those who have just dropped $60,000 on a vehicle, when the price hit is only half that amount it's easier to take the occasional nicks and scratches. The 2005 HUMMER H2 is a great deal for anyone needing a luxury truck that also works for a living. 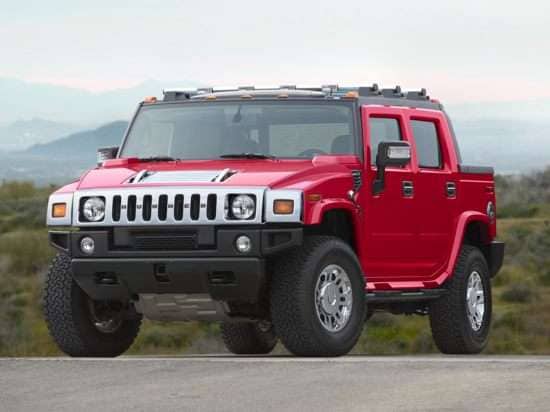