The H3T is a balance of off-road capability and on-road drivability that really does not belong in the midsize truck category. Instead it offers midsize truck utility to trail running adventure seekers -- people who would normally drive Jeep Wrangler Unlimited Rubicons or H3 SUVs, but need more cargo space. We were invited to the 2009 Hummer H3T midsize pickup truck launch by Hummer to come up to the Sierra Nevada Mountains and drive the new four-door pickup on tight, twisty rock strewn trails. The trail gave us a sample of the Hummer H3T's off-road capability and maneuverability while the drive to the trailhead gave us a feel for the midsize four-door pickup's on road manners.

Despite having one of the Hummer VIPs in the backseat, we somehow managed to deviate from our designated route and make a complete circle, which allowed us to retackle some now familiar road. This time around we were able to push the H3T a little more aggressively through the twisty Sierra foothills to make up for lost time and rejoin the rest of the group. The H3T did admirably, maintaining its composure in the turns and keeping speed as the road wound ever higher.

When the H3 came out, most agreed it was underpowered. When Hummer announced it was dropping in the 5.3-liter V-8 and introducing Alpha models we were excited and couldn't wait to get behind the wheel. Yet when we drove it performance was not what we expected. Instead of offering lively acceleration it merely brought the H3 up to what should have been the entry or mid level mark to begin with.

None of that changes with the introduction of the H3T. The inline-5 is still underpowered and the V-8 of the Alpha is still only performing at mid-level performance. The bulk of the H3T is just too much for the 5.3-liter V-8 engine to lug around masterfully.

Hummer employs GM's four-speed automatic that has found its way into just about every vehicle GM built in the last five years. It's a bulletproof, tried and true performer, but five and six-speed slush boxes are commonplace throughout the industry and offering better performance and economy. It's a shame Hummer's new midsize truck is starting out with a handicap when the market is shifting to ever more fuel efficient vehicles. Especially considering there's a perfectly good six-speed unit just over the GMC fence.

The H3T Alpha adds refinement to the H3T driving experience. With the automatic transmission and bigger engine, the feeling of piloting a tractor along the highway is replaced with an effortless, although uninspiring driving experience.

The H3T is big for a midsize truck, but don't let the size fool you, it is still very maneuverable through tight situations as we found out on our trail ride. Steering is not noteworthy other than it avoids being as ponderous as so many midsize trucks and SUVs tend to do. In the H3T, it simply exists and does what it is meant to do. The longer wheelbase of the H3T gives it a decided advantage over the H3 SUV, by distributing imperfections in the road over a longer area to reduce rocking and bucking. Hummer claims the suspension and shocks are specifically tuned to the H3T and we could find nothing to argue the contrary. The ride was smoother than any mid-size four-wheel drive pickup in recent memory and the truck handled corners well.

Where the longer back end does come into play is while the H3T is in reverse. There is no backup camera for manual transmission models and anything directly behind the vehicle and lower than the top of the tailgate will soon be reduced to scrap if you are unaware of its presence.

The same suspension that worked so well on the road to maintain our comfort did equally well on the trail, absorbing boulders and dipping into holes without getting tippy and tempting gravity to see how well Solar Flare Metallic paint holds up against pedal car-sized boulders. Watching the droop and compression of the compliant suspension, it seems there should be more body roll on the highway, but Hummer seems to have found an ideal balance between off-road performance and on-road comfort.

Our tester came in the H3T Alpha Leather trim with the Adventure suspension package which meant LT285/75R16 (33-inch) on-/off-road Bridgestone radials differentiated it externally from a base H3T or H3T Alpha. The addition of an Alpha badge is the only other external marking that distinguishes the H3T Alpha from H3T base models.

Adding leather into the mix of the Hummer H3T adds a touch of refinement to the interior that makes the hard plastics that cover so many other surfaces in the cab nearly forgivable. The leather seats are power adjustable and heaters creating an upscale feel to the posterior sense of touch that other senses are denied by the hard, low-glare, but visually acceptable plastics. The Hummer H3T Leather also adds a leather wrapped steering wheel to the package as well as upgraded carpeting, which improves interior cabin noise making it quieter than competitors such as the Dodge Dakota TRX. 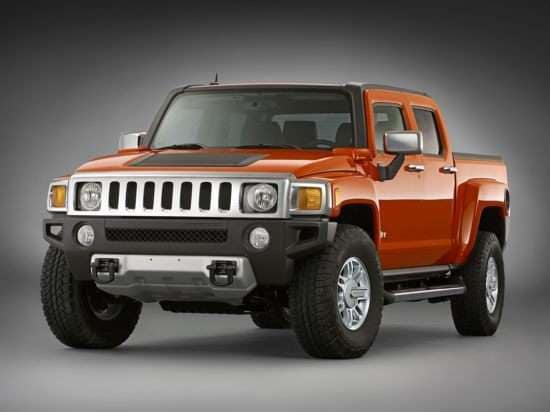