The leader among all, um, H3s…

Hummer H3 Alpha – 2008 First Drive: Imagine naming one of your children Genius. You’re absolutely positive that this particular offspring will live up to the expectations of his grandparents, future employers, and not least of all, you. The name provides the kid with an optimistic step forward, and compared to his paste-eating sister, he’s Einstein reincarnated. And then you enroll your future know-it-all in school, only to discover that your progeny, while countless brain cells ahead of his sibling, is just an average Joe. Well, no, he’s not Joe. He’s Genius, a name that it now appears he may never live up to.

Welcome to the world of the 2008 Hummer H3 Alpha. As little Genius might learn in his first lesson on wolves, alpha is a term associated with the most aggressive or respected member of a group or pack. Follow the logic and it would seem that the H3 Alpha should represent the be-all and end-all of midsize suvs. And it does, provided the field consists only of Hummer H3s. One of the primary complaints with the existing H3 has been about the lack of grunt from its five-cylinder engine, even since more power was added for 2007. The V-8-powered Alpha addresses that issue, tacks on a nice grouping of standard features, and maintains outstanding off-road capability to boot. But even with the upgrades and that king-of-the-hill name, competitors continue to build rides that match or exceed the H3 Alpha in the areas of power, towing capacity, utility, and overall bang for the buck. Running about average and unable to live up to unrealistic expectations, the 2008 Hummer H3 Alpha might the perfect ride for our little Genius.

General Motors has been building Hummers for about eight years, starting with the H1, following with the H2 in 2002, and finally introducing the H3 in 2005. Based on the Chevrolet Colorado pickup, the smaller and more affordable H3 SUV was created to draw new shoppers into Hummer showrooms. The first examples rolled off the assembly line as 2006 models, priced from just under $30,000 and offering 220 horsepower from a 3.5-liter five-cylinder engine. Cries for more power brought a 242-horse, 3.7-liter five-cylinder in 2007, and finally, the 300-horsepower, V8-powered 2008 H3 Alpha.

What really separates the Alpha from the rest of the 2008 Hummer H3 pack is its V8 engine, though that’s not the only distinguishing factor. This boldest of H3 offerings also boasts a 4.10 rear axle ratio, Alpha nomenclature, 16-inch wheels, and upgrades including a 200-watt Monsoon sound system, leather on the steering wheel and seats, and chrome trim accents. Buyers can also choose from a wide variety of options, such as off-road body and light guards, rack systems, added body-color and chrome exterior enhancements, and a rearview camera system. Built as one integrated unit, the camera transmits video to a monitor that slides out of the interior mirror. The unit is a bit bulky, but placing the video screen next to the mirror makes a lot more sense than dropping it into the center dash, as is done in most cases.

All H3s are equipped with the usual array of standard goods, such as power windows and door locks, keyless entry, cruise control, full-time four-wheel drive, and air conditioning.

Pricing for the V8-powered 2008 Hummer H3 Alpha starts at $39,260, including a $615 destination charge, and creeps into the luxury ute arena via the $43,730 H3 Alpha decked out with an H3x Package. Moving down into the five-cylinder lineup, choices include the Base H3, priced at $30,695, and the H3x, which with its fancier interior, chrome accents, and unique exterior colors brings the tally to $38,990.

Besides an engine upgrade and a greater level of standard equipment, there’s not a lot distinguishing the H3 Alpha from lesser models. Visually, the 2008 model is a carryover from 2007 and continues to ride on the same 111.9-inch wheelbase, provides up to 9.1 inches of ground clearance (with 33-inch tires),  and features identical approach, departure, and breakover angles. Thanks to the addition of that V-8, an extra 150 pounds brings the H3 Alpha’s curb weight to 4,854 pounds.

Hummer has fitted the H3 Alpha with soft but seemingly durable leather upholstery. Those hides, along with the rubber primary grips and mesh headliner impart a sense of quality. A padded center armrest and rubberized door armrests are also welcome touches. However, in a nod to its lower price point, the H3 Alpha’s interior is plastered with hard, though not glossy plastics which stand in contrast to the H2’s padded materials. Likewise, the smaller Hummer’s alloy-ish accents lack the luster of those in the pricier H2.

In terms of utility, the H3 Alpha continues with the hit-and-miss approach. There’s a large glovebox, dual cubbies under the front center armrest, and a rear cargo area that’s bathed in hard plastic. We’d usually follow up with a complaint about sub-par materials, but in the case of an off-roader like the H3, a cargo area that’s durable and easy to clean trumps aesthetics. Plus, the tailgate opens toward the curb, a point sure to be appreciated by the parallel parkers out there. Now, if designers would add a shock capable of holding the tailgate open on even the slightest of declines, and heck, toss in some door pockets worth a hoot.

At the heart of the 2008 Hummer H3 Alpha is something that GM fans have enjoyed for years – a small-block V-8. In this case it’s a 5.3-liter, 16-valve aluminum engine pushing 300 horsepower at 5,200 rpm and 320 lb.-ft. of torque at 4,000 rpm. Compare that to the base H3’s 3.7-liter five-cylinder engine that offers 242 horses and 242 lb.-ft. of torque. A four-speed automatic transmission works with a full-time four-wheel-drive system, featuring a low range, optional locking rear differential, and the added strength of a cast-iron front differential housing. Put it all together and you’ve got a rig now capable of towing up to 6,000 pounds (the five-cylinder H3 tows up to 4,500 pounds).

Behind the scenes, the Alpha features the same suspension as found on other H3s, including an SLA torsion bar with a tubular stabilizer bar up front and leaf springs with a solid stabilizer bar out back. The Alpha models do, however, receive unique engine mounts and specifically-tuned shocks. A new rack-and-pinion steering system keeps the driver in tune with the road (whether asphalt or dirt), while four-wheel antilock disc brakes bring things to a controlled stop. Standard Dynamic Rear Proportioning maintains a proper balance between front and rear brake pressure. Standard Goodyear rubber measures 265/75R16.

As one might expect, OnStar is standard on all 2008 Hummer H3 models, though the turn-by-turn navigation offering is reserved for the options list. Other standard safety-related equipment includes side-curtain airbags, StabiliTrak, ABS, a tire pressure monitor, and vehicle-to-vehicle crash compatibility, which translates to an even fight when your SUV does battle with a Honda Civic. 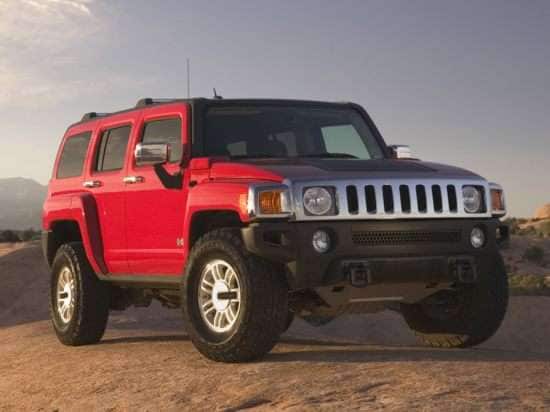