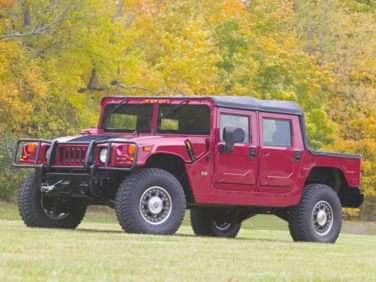 All About Hummer H1

The HUMMER H1 has come a long ways since its humble military service beginning. The HUMMER was actually the result of the Army needing a new vehicle that could ‘do anything’ and ‘go anywhere.’ GM was awarded the contract after producing the winning design. Production of the original vehicle started in 1985 with the first civilian variation hitting the market in 1992. The original army vehicle was called a High Mobility Multipurpose Wheeled Vehicle (HMMWV),which then became known as the Humvee. This vehicle functioned in many capacities for the army, including missile carrier, ambulance and even a missile carrier. It's the Gulf War that moved the vehicle into the spotlight and created the demand for a civilian variation which GM happily complied. This first one wasn't very different from the military version - just a few comforts and conveniences added in. The civilian variation became known as the HUMMER. It wasn’t until 1999 that General Motors bought the HUMMER brand name and renamed the vehicle the H1. Its popularity exploded around this time as the H1 was picked as the vehicle of choice by several big name celebrities and GM has never looked.

The earlier HUMMERs were in production from 1992 through to 1995 and most had a 6.2 L diesel engine under the hood. A few models had a gas engine. In these first few years, there were only minor changes made to the vehicle. From 1996 through to 2005, the vehicles went through some major engine changes. In 1996, GM switched out the 6.2 L engine that produced a 150 horsepower for a 6.5 L diesel V8 that could produce 170 hp. GM also brought out a 6.5 L turbocharged engine that upped the horsepower to 195 hp. Also available was a 5.7 L gas V8 in 1996 and 1997. All HUMMERs had an automatic transmission, although the models varied from year to year.

Features that improved over the next few years, as the technology became available, include the addition of antilock brakes and traction control. As the vehicle rolled into the new century, simple changes were done like the addition of rear armrests, a revamped gauge cluster and even the option of 17 inch alloy wheels. More changes came about in 2002 with the arrival of the 10th Anniversary package that saw more interior space and a new steering wheel. Over the new next few years, the H1 received an electronically locking rear differential, a 12 disc CD change, and more horsepower on the 6.5 turbodiesel engine. In 2004, the HUMMER H1 received a new interior.

The HUMMERs are all of the same style - a basic two door and four-door body with several different tops available. The vehicle can be configured with hardtop, slantback, soft and a wagon top. The large, heavy and go anywhere attitude started to lose its appeal when the gas crept up and the price of the HUMMERs came in around $100,000. The HI was discontinued in 2005. In the next year, the H1 Alpha was released but it was also discontinued after only one year even though the changes made on this one made it one of the best Hummers yet.

The Hummer H1, although it received an updated interior in 2004, is still sparse in features. The update added in new materials, radio and an integrated 6-disc CD changer. With the 4-door model, the front seats and rear seats are bucket style. In the 2-door model there are only bucket seats in the font. Options and packages are also slim on this vehicle. There is an Off-Road Adventure Package that adds in front and rear axles, a winch, 2 piece alloy wheels and off-road tires. Standalone options include run-flat tires, highway touring tires, a 12,000 winch and a CD changer with Monsoon audio system.

The HUMMER H1, due it’s weight is considered to be a Class 3 Truck even though the public views it as a SUV. Under this class, it therefore does not have to meet the same safety standards as a car or pickup truck. For this reason, the Hummer is not required to have any airbags. Features included as standard on the H1 include antilock brakes, traction control and a tire pressure monitor system.