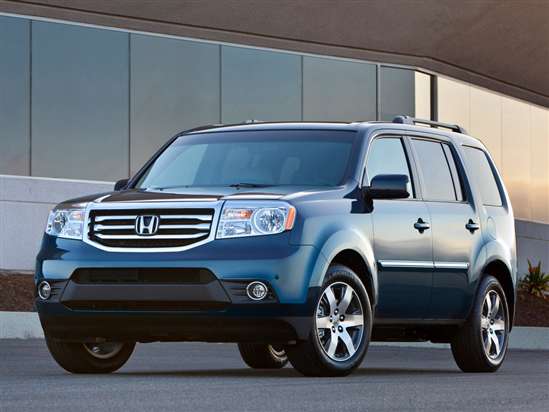 Now in its final year before a complete redesign, the 2014 Honda Pilot is unchanged.

The Pilot EX-L model adds leather seats, heated front seats, a power sunroof, a power tailgate, and more. It can also be upgraded with a choice between a rear-seat DVD entertainment system and a navigation system with a hard-drive music server and a wide-angle reversing camera.

Both of these extras are standard for the Pilot Touring, which is also fitted with a premium sound system and memory for the driver’s preferred seat and mirror settings.

Every 2014 Honda Pilot is equipped with a 250-horsepower, 3.5-liter V-6 engine equipped with Variable Cylinder Management (VCM) technology, which allows the engine to operate on fewer cylinders when cruising or coasting in order to conserve fuel. As a result, Honda claims that the Pilot gets better fuel economy than any other 8-passenger SUV.

A 5-speed automatic transmission is standard, delivering engine power to the Pilot’s front wheels. The transmission is equipped with Grade Logic Control, which detects when the Pilot is climbing or descending a hill and automatically holds a lower gear to improve hill-climbing capability and to increase engine braking when going down a hill.

A Variable Torque Management 4-wheel-drive (VTM-4) system is optional for the 2014 Pilot. When the front wheels slip, power automatically transfers to the rear wheels to add traction. The VTM-4 system also provides the ability to lock the power split to 50:50 at speeds up to 18 mph to ensure the best traction.

In combined driving, and according to the EPA, the 2014 Honda Pilot returns between 20 mpg and 21 mpg, depending on whether or not it is equipped with VTM-4.

Based on evaluations conducted by the National Highway Traffic Safety Administration (NHTSA), the 2014 Pilot receives an overall crash-test rating of 4 stars. Note, though, that the Pilot does not score lower than 4 stars in any individual test.

According to the Insurance Institute for Highway Safety (IIHS), the Honda Pilot receives a “Good” rating for moderate overlap frontal-impact, side-impact, rear-impact injury prevention, and roof crush strength tests. The Pilot had not been assessed for performance in the tough new small overlap frontal-impact test as this summary was written.

The Honda Pilot is not a high-tech vehicle. Aside from the navigation system, reversing camera, hard-drive music server, and rear-seat entertainment system that are options for the EX-L and standard for the Touring, the only technology worth noting is a Hill Start Assist system, a triple-zone automatic climate control system with a humidity sensor, and a Bluetooth connection with music streaming capability.