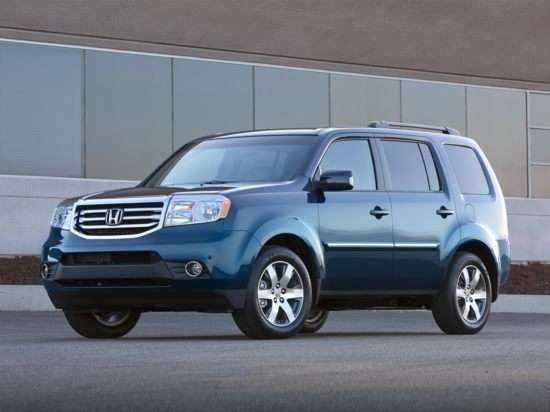 Facing continued competitive pressure from next-gen full-size crossovers like the Ford Explorer and Nissan Pathfinder, the 2013 Honda Pilot adds some particularly popular technologies to its list of standard features for the new model year, including: A rearview camera, Bluetooth phone and audio capabilities, an integrated USB port, automatic climate controls, and a high-res 8-inch screen for its “intelligent Multi-Information Display” (i-MID) systems.

Right off the lot, the standard 2013 Honda Pilot LX—able to seat eight, in three rows—has all the new technologies mentioned in the “Changes” section; then, it also features tri-zone automatic climate control (with humidity control and an air-filtration system), steering-wheel controls for cruise and audio functions, 17-inch wheels, and a seven-speaker, 229-watt audio system with a subwoofer and USB audio interface.

A more luxurious cabin environment awaits purchasers of the 2013 Honda Pilot EX-L, which boasts a leather interior, heated front seats (with the addition of a four-way power-adjustable front-passenger seat), a one-touch power moonroof and XM Radio; as an added versatility feature, the 2013 Honda Pilot EX-L provides a power tailgate with a lift-up glass hatch. Also worth noting: The EX-L model can be ordered with both a rear-seat DVD entertainment system and Honda’s Satellite-Linked Navigation System.

Providing the motivation for the 2013 Honda Pilot lineup is the automaker’s 3.5-liter V6 engine, capable of making 250 hp and 253 lb.-ft. of torque and benefiting from i-VTEC valve-timing technology. In all cases, that engine is mated to a five-speed automatic transmission with Grade Logic Control, which helps keep the 2013 Honda Pilot in the optimum gear on hilly roads.

With top scores in testing for moderate-overlap, side-impact, rear-impact and roof-strength occupant protection, the 2013 Honda Pilot was named a Top Safety Pick of the Insurance Institute for Highway Safety (IIHS). The all- and front-wheel-drive models of the 2013 Honda Pilot were evaluated separately by the National Highway Traffic Safety Administration (NHTSA), but each received the same 4-star overall safety score, earning 4 stars for frontal and rollover protection and 5 stars for side-crash protection.

Among the most notable technologies in the 2013 Honda Pilot are its: