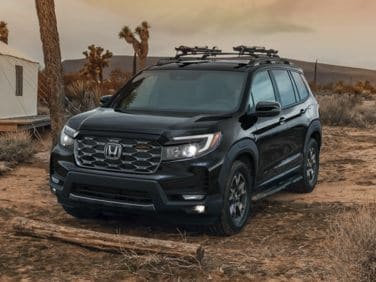 All About Honda Passport

The Honda Passport is an SUV that originally debuted for the 1994 model. Following the 2002 model year, the Passport was discontinued and replaced by the Honda Pilot. During its production run, the vehicle went through two generations of body design, with the final version being introduced for the 1998 model year. Classified as a midsize SUV, the Passport competed directly with such vehicles as the Dodge Durango, Ford Explorer and Toyota Highlander.

The Honda Passport was actually built by Isuzu and served as a re-branded clone of the Isuzu Rodeo. Though structurally and visually similar, the Passport differed from the Rodeo in cosmetic details and available features. Both vehicles featured rugged styling and accommodated up to five passengers.

A 3.2-liter DOHC V6 engine was the lone engine option for the 2nd-generation Honda Passport. It delivered 205 horsepower and 214 lb-ft. of torque. The engine could be paired with either a 5-speed manual transmission or 4-speed automatic. EPA-estimated fuel efficiency rated the manual powertrain at 18 mpg in the city and 20 mpg on the highway. The automatic faired slightly worse in the city, earning 16 mpg.

Available performance features included skid plates and a full-sized spare tire. A 4WD package could be added to any one of the trim levels, which included all-wheel drive, 2-speed transfer case, 4-wheel disc brakes and limited-slip differential.

The final production version for the Honda Passport included the following specifications: