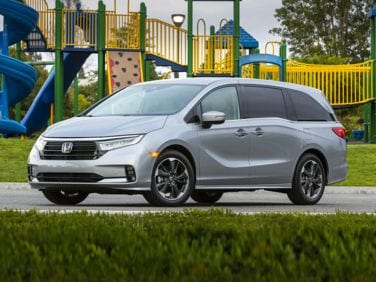 All About Honda Odyssey

The 2008 Honda Odyssey is a four-door minivan with two of those being sliding doors. The vehicle has three rows of seating that can hold up to eight passengers. The Honda Odyssey has had over a decade to make its way into the hearts of consumers. Since its debut in 1995, the Japanese minivan has undergone several changes over the years with the second generation coming out in 1999 and the third generation in 2005.

The original Odyssey had a four-cylinder engine but offered a new concept in doors as they swung open like cars. The engine was redesigned several years later in 1998 to a 2.3 liter VTEC engine that did not do so well on the market. The Odyssey was bought by Isuzu and renamed the Isuzu Oasis. The second generation Odyssey in 1999 was bigger and more powerful.

The 2008 had minimal chances and the 2009 Honda Odyssey has no major changes this year either. The current generation of the Honda Odyssey is wider, heavier and comes in four models; LX, EX, EX-L and Touring. This model also offers glove boxes for both the driver and the front passenger. Another change over earlier version is that the transmission is now fitted to the floor instead of the steering wheel.

There are some exterior changes like a six-sided grille and a new look for the front bumper. The minivan has some new technology bringing it up a notch. There is now a Bluetooth system, and a four-way power passenger seat as standard equipment for the EX-L and Touring models. The EX-L also receives a rearview camera display that’s built into the rearview mirror. There are also memory-linked side mirrors. Other new features for this year are active front seat head restraints and daytime running lights.

It seems that Honda paid attention to the more practical minivan consumers by adding in different fabric and storage bins for the second-row passengers. The 2009 Honda Odyssey also offers a more fuel efficient version of the optional Variable Cylinder Management (VCM) system. This version can shut down two or three of the engine’s six cylinders as required when driving at cruising speeds or when slowing down. This is a similar system to the one used in the 2008 Honda Accord. All of the Honda Odyssey models have a 3.5 liter V6 engine paired with a five-speed automatic transmission.

The Odyssey also offers Honda’s Advanced Compatibility Engineering(ACE) body structure, which is more rigid than other structures. This contributes to better handling, smoother ride and higher safety levels if the vehicle is involved in an accident. The aerodynamic design also improves fuel efficiency and stability when driving at higher speeds.