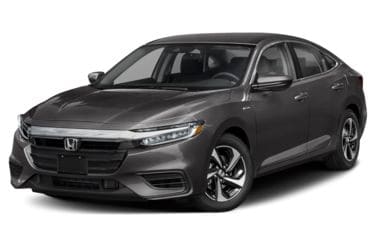 All About Honda Insight

The all-new Honda Insight is a four-door, five-passenger hatchback that uses an advanced hybrid drivetrain. With the runaway success of the second-generation Toyota Prius and the impending launch of the third-generation model, Honda wanted to waste no time in introducing its hybrid-exclusive model, the 2010 Honda Insight. Borrowing the name from the small, two-passenger hybrid coupe that debuted in 2000, the new Honda Insight is more of a mass market car than its predecessor with a price and fuel economy numbers to rival any hybrid on the market. Despite gasoline prices holding much lower than the record held last summer, Honda’s introduction of the all-new Insight shows a serious commitment to improving fuel economy and reducing harmful emissions. Although pricing has yet to be announced, Honda has said that when the new Insight goes on sale this April, it will be priced under $20,000 and hopes to sell at least 200,000 units worldwide.

Just like Honda used the Insight name to offer the first mass-produced hybrid car in the United States, the latest Insight hybrid is just the next step in Honda introducing a growing number of hybrid vehicles. Joining the existing Civic hybrid and now the Insight, Honda has said that it will launch a third hybrid model within the next couple of years with a design that is likely to be based on the Honda CR-Z concept vehicle. The design and purpose of the 2010 Honda Insight should fall somewhere between the original car and recently introduced FCX Clarity – a low-production, hydrogen-powered fuel cell vehicle. Honda will use aspects of both vehicles to introduce what should be the most affordable new hybrid car on the market.

At first glance, it would be easy to mistake Honda’s new hybrid hatchback with its main rival, the Toyota Prius. The reason for such similarity is the sleek aerodynamics that this design affords. As more hybrids are introduced to the market, it’s becoming more apparent that aerodynamics and weight reduction are almost as important as the advanced technology used in the electric drive motors and battery packs. The wedge-shaped Honda Insight is smaller than the Prius and incorporates design aspects from the Civic and the FCX Clarity to distinguish it from its class-leading competitor. The raised liftgate improves the overall aerodynamics of the Insight and proved to be a good opportunity to use a CRX-inspired rear window for optimal rearward visibility.

Unlike the previous Insight, the new hybrid features more interior room, four passenger doors and a sufficient cargo area, but, more importantly, if you like the inside of the current Honda Civic, you’ll love the all-new Insight. The dual tiered gauge cluster features a prominent central tachometer mounted below digital speedometer. The hatchback design of the Honda Insight allows for improved cargo capacity giving it a distinct advantage over its predecessor as well as most sedan competitors. With seating for up to five passengers, the new Insight provides a convenience the previous Insight could not offer, while the hatchback design and 60/40 split rear seat helps to maximize the car’s cargo capacity.

The whole reasoning behind building the Insight was to give Honda a purpose-built hybrid car, so Honda used its proven Integrated Motor Assist (IMA) paired to an efficient 1.3-liter inline-4 with i-VTEC and a continuously variable transmission (CVT). While the Prius has the ability to drive silently on electric power only, the Insight’s hybrid system still routes power to the wheels via the engine even with the car in electric mode. The 10-horsepower electric motor bolts to the flywheel between the engine and transmission. Honda expects fuel economy to equal 40 miles per gallon in the city and 43 mpg on the highway – slightly less than the Civic Hybrid but the Insight should cost considerably less.

Like the upcoming Ford Fusion Hybrid, the new Insight will help train its drivers to be more efficient by using the nifty Eco Assist. By pressing the green “ECON” button mounted on the dash, the driver-focused Eco Assist not only adjusts certain aspects of the Insight’s drive systems, but it also displays an ambient light behind the speedometer to tell the driver how efficiently or inefficiently he or she is driving – the more fuel efficient the driver is, the greener the lighting and as the driver starts driving less efficiently, the lighting turns to dark blue. The idea behind systems like this is that if the drivers can see their immediate impact on fuel economy, they will be able to learn how to drive more efficiently.