The Honda Crosstour is a four door five passenger midsize sport wagon that combines the practicality of an crossover with the reliability of the Accord thanks to the 25.7 cubic feet of cargo capacity that nearly doubles with the second row folded flat that is powered by a 3.5 Liter i-VTEC V6 making 271 HP and 254 lb-ft of torque and gets an estimated 18 MPG around town and as much as 27 MPG on the highway and is sold in three distinct trim levels EX, EX-L and the 4WD EX-L with four wheel drive.

The base Honda Crosstour EX starts out at $30,340 and comes standard with convenience features like Bluetooth hands free connectivity, a back up camera displayed in the rearview mirror, a USB jack for digital music devices as well as AUX input, 6 disk in dash CD changer, dual zone automatic climate control, one touch power moonroof, power adjustable front buckets as well as a hidden removable utility box.  While front side airbags, side curtains and active head restraints round out the safety highlights.

The well equipped EX-L gets leather covering the heated seats, steering wheel and shifter, side mirrors that tilt down automatically when in reverse as well as XM Satellite radio and a set of five spoke 18 inch alloys starting at $32,990 while the Honda Satellite Linked Navigation System with Voice Recognition and Rearview Camera brings the price up to $35,090.  The $34,440 4WD EX-L adds Real Time four-wheel drive the package, while navigation bumps the sticker price up to  $36,540.

Cars similar to the Crosstour include the Toyota Venza, the Nissan Murano and the Mazda CX-7.

Learn more about the 2012 Honda Crosstour. 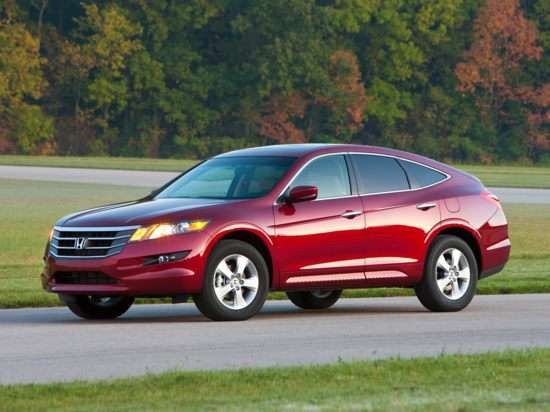