One part hybrid and one part sports coupe, the 2013 Honda CR-Z is a spiritual successor to the iconic Honda CRX, a beloved 2-seater sold during the 1980s and 1990s. The similarly shaped CRX was charged then with the same mission as the CR-Z is today: Maximize fuel economy and fun at the same time.

The 2013 CR-Z also recalls the original Honda Insight, a teardrop-shaped 2-seater with a rakish rear end that introduced the concept of a hybrid vehicle to Americans just before the turn of the century. Packaged in similar fashion, the CR-Z contains the latest version of the original Insight’s groundbreaking Integrated Motor Assist (IMA) gasoline/electric hybrid powertrain. But it’s not quite as thrifty with a gallon of gas as the original Insight was.

Taking its cues from its predecessors, the Honda CR-Z debuted for the 2011 model year as a low-volume niche model designed to provide distinctive style and entertaining performance combined with great fuel economy and low emissions. Honda has updated the 2013 CR-Z in the hope of expanding its appeal, adding more power and greater performance while improving fuel economy, so we thought we’d better take another look at one of the most fun-to-drive hybrids on the market.

Buying a CR-Z is easy. This car comes pre-packaged in standard CR-Z ($20,765 including the $790 destination charge) or upgraded CR-Z EX ($22,445) trim levels. A continuously variable transmission (CVT) with paddle shifters is optional on both models ($650).

If you once knew and loved the old Honda CRX, gone from showrooms for more than 20 years now, the Honda CR-Z’s styling is familiar but vaguely off-putting, having taken on the thicker mid-section and the double chin that most of us do after two additional decades on the planet. For those of us still wistful for the CRX – or something very much like it – walking up to the CR-Z is similar to approaching a former flame at a class reunion. This sporty Honda’s design DNA is instantly recognizable, but the details aren’t as appealing as they used to be.

Slip inside the CR-Z, and you sit on comfortable sport seats facing a futuristic, driver-centric dashboard that clusters all of the important controls around the steering wheel. The only element detracting from the Tommorowland ambience is the optional touchscreen infotainment system, which suffers from tiny buttons, aging graphics, and too much sun glare at certain times of day. Other than this frequently displeasing interface, and a cheap headliner that looks out of place against richly grained plastics, low gloss surfaces, mesh cloth seat materials, and translucent plastic switchgear and trim, the 2013 Honda CR-Z is equipped with a bespoke interior boasting plenty of functionality.

Offering plenty of seat comfort for two full-size adults, the Honda CR-Z feels bigger inside than the car’s exterior dimensions might suggest. The driver’s seat is equipped with a manual seat height adjuster, one that ought to serve as a textbook example for the rest of the auto industry. Using a large, solid lever that is easy to grasp, I had no trouble jacking my 250-pound body up to a more desirable driving position. All that’s lacking here is a center armrest, which is offered as an option through the dealer.

Though the Honda CR-Z offers small rear jump seats in other parts of the world, the version sold in the United States has bins located behind the front seats. A divider separates the passenger compartment from the luggage compartment. Fold it down, remove the retractable cargo cover, and the CR-Z can swallow an impressive 21.5 cu.-ft. of junk in its trunk. Shopping trips to the big-box store are no problem for this car.

My only complaint about the CR-Z’s interior, aside from its yester-tech navigation system design, is that the car’s sloping roofline severely compromises rear visibility. Try reversing out of a slanted parking space, or turning left onto a road that runs at a diagonal to the one you’re on. At least a reversing camera, made standard for 2013, helps with the former exercise. The latter, as I discovered turning left off of Mulholland Highway onto Kanan Road in the mountains near Malibu, is one of blind faith.

Furthermore, visibility directly to the rear of the car is compromised by the CR-Z’s 2-piece glass tailgate. In some instances, it completely obliterates traffic behind the car, so be sure to position the side mirrors accordingly.

I would invite Honda to take a very close look at the Uconnect 8.4 infotainment system that Chrysler installs in many of its latest vehicles. This is how technology interfaces are done. Comparatively speaking, the Honda CR-Z’s optional touchscreen infotainment system, which is yanked out of the corporate parts bin, is soooooo 2010.

And that’s why this rectangular unit looks completely out of place in the otherwise forward-thinking CR-Z. From the backlit gauge cluster and its Eco Minder graphics to the translucent plastic switchgear clustered around the steering wheel, the Honda CR-Z is appealingly futuristic while at the same time exceptionally functional. This is an easy and pleasing car to operate. Unless it is the EX model equipped with the optional infotainment system.

The Insurance Institute for Highway Safety (IIHS) calls the Honda CR-Z a “Top Safety Pick” for 2013. That’s the good news.

Equipped with the latest iteration of Honda’s Integrated Motor Assist (IMA) hybrid technology, the 2013 Honda CR-Z combines a 1.5-liter 4-cylinder gasoline engine with an electric assist motor and a new Lithium-ion battery pack. Though upgraded, this hybrid remains what it known as a “mild” hybrid, which means that it cannot accelerate on battery power alone. Rather, the electric motor and Li-ion battery are present to assist the gasoline engine at low speeds in order to conserve fuel.

For 2013, the CR-Z generates 8 extra horsepower, now producing a combined 130 ponies at 6,000 rpm. Buyers choose between a 6-speed manual gearbox and a continuously variable transmission (CVT) with paddle shifters, and torque output is dependent upon transmission selection. With the stick-shift, the CR-Z’s combined torque measures 140 lb.-ft. between 1,000 and 2,000 rpm, up 12 lb.-ft. across an extra 250 rpm from last year. Get the CVT, as most people will, and the CR-Z produces 127 lb.-ft. of combined torque between 1,000 and 3,000 rpm. That’s an increase of just 4 lb.-ft. compared to the 2012 model, but the torque curve is expanded 1,000 rpm higher to make the car feel more energetic.

Three driver-selected modes calibrate the CR-Z’s dynamic responses. Using buttons to the left of the steering wheel, the driver can select between Normal, Econ, and Sport driving modes. These modes modify the way the throttle and steering respond to driver inputs, and how the air conditioning and idle-stop functions operate. As you may have surmised by their titles, Econ mode helps the driver to conserve fuel, while Sport mode makes the CR-Z more fun and responsive. An Eco Assist display adds visual cues to the instrumentation to communicate how efficiently or inefficiently the car is being driven.

This wasn’t my first rodeo with regard to driving the Honda CR-Z. Previously, I’d sampled a 2011 model equipped with a manual gearbox, and so this time I requested one with a CVT. As it turns out, I much prefer the manual, which snicks precisely into gear, is equipped with a light clutch, and supplies maximum powertrain torque almost immediately after you dip into the throttle.

Compared to the row-‘em-yourself transmission, the CVT makes the car feel sluggish, and part of this impression is the direct result of the characteristic engine droning that accompanies the CVT’s installation. Paddle shifters help a little bit, adding stepped “gears” with slushy transitions, but there’s no denying that the optional CVT sucks some of the life out of the CR-Z. Furthermore, during my week with the 2013 model, the CVT frequently provided wavering response under acceleration, especially when powering out of a corner at an intersection, feeling almost like the transmission was clenching as it tried to manage power delivery to the front wheels.

You’ll need to live with the CVT’s flaws if you want to maximize gas mileage. The CVT is far better at conserving fuel, and I averaged 38.6 mpg in a mix of driving, the miles covered primarily with the car’s Normal driving mode engaged. In the past, with the manual transmission, I’ve extracted 32.7 mpg, which almost negates the point of a hybrid powertrain in the first place.

Regardless of transmission choice, the CR-Z isn’t very fast, but it is peppy, especially with the 6-speed manual. Despite its droning CVT, my 2013 CR-Z test car felt more energetic than the 2011 version I tested a couple of years ago, proving more eager to scale the twisting, mountainous, two-lane roads near my home. I attribute this newfound display of energy to the car’s additional horsepower and broader torque curve, as well as its new Plus Sport button, which actually makes a difference, especially when running the CR-Z in Sport mode.

I also wasn’t as critical of this 2013 test car’s suspension tuning as I was the 2011 model’s. Equipped with a MacPherson strut front suspension and a simple torsion beam rear suspension, the CR-Z weighs just 2,657 lbs., but nearly 60% of that weight sits over the nose despite the placement of the battery pack and hybrid components under the car’s cargo floor. Nevertheless, my 2013 CR-Z proved planted and predictable in terms of its handling, almost tossable. The weight of the battery pack and electric motor sitting low in the car reduces the CR-Z’s center of gravity, which helps in the handling department, but the rather small tires can only take so much abuse before they start to relinquish their grip on the pavement.

The CR-Z’s electric steering is terrific, feeling absolutely natural in all three of the car’s driving modes, responding crisply to driver commands issued through a perfectly sized and shaped steering wheel. Similarly, the diminutive Honda’s brake pedal provides instant response and much better feel than the regenerative braking systems typically found in other hybrid cars. Combined with the CR-Z’s planted handling, and its firm and sporty ride quality, these dynamic characteristics make the Honda genuinely entertaining to drive.

However, that same firm, sporty suspension tuning becomes a liability on the highway, where a busy and choppy ride becomes quickly tiresome. Add the racket emanating from the engine, courtesy of the CVT, and my recommendation is that if you’re buying a CR-Z as a fun little commuter car, you’ll retain your sanity better if you learn how to drive a manual.

Cute and comfortable, the Honda CR-Z is both entertaining and practical, all the while returning decent fuel economy. The design is stylish, it’s got a whole bunch of jaunty personality, and the interior transports you straight into the future. Plus, it’s easily affordable. But, there are shortcomings.

The CR-Z’s NHTSA crash-test scores are not what they should be. Honda’s IMA system is not the most sophisticated hybrid powertrain on the market; it doesn’t even have the ability to run solely on electric power, which is a basic expectation in a modern hybrid. I’m no fan of the optional infotainment system. And rear visibility is awful. Clearly, there are issues that ought to be addressed with this otherwise excellent little green machine.

Honda supplied the vehicle for this review 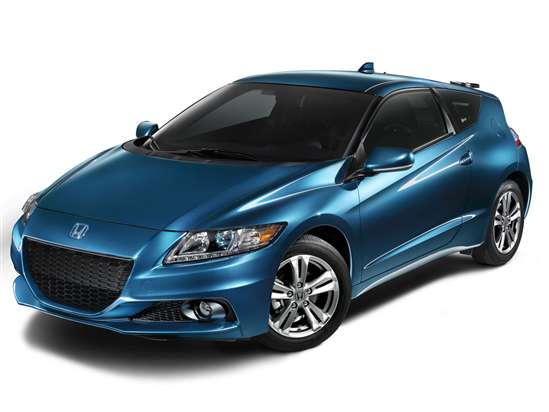