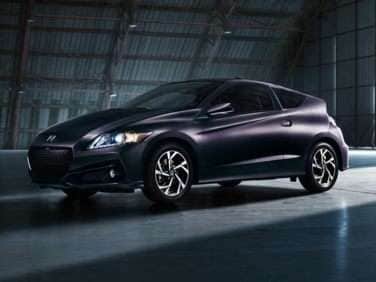 All About Honda CR-Z

The Honda CR-Z kind of lives in the grey area existing between sports car and sporty economy car. Yes, it has a rakish profile, and yes it has two seats just like a sports car. It’s also the only hybrid offered with a manual transmission, and further it offers very entertaining handling besides. However, Honda doesn’t really call the CR-Z a sports car, just as they didn’t call its fun to drive predecessor the Honda CR-X a sports car.

And frankly, the little Honda isn’t particularly fast—although it does handle really well. But you show us a truly fun to drive two-seater with manual transmission that is capable of returning 31mpg in the city and 37 on the highway and we’re going to call it an economical sports car for thinking people.

Debuting for the 2011 model year, the Honda CR-Z came to market producing 122 horsepower and 128 ft-lbs of torque, so performance was most assuredly NOT its long suit. Some critics also chastised the little Honda for not being able to return 40 miles per gallon or better too. In the Honda’s original powertrain configuration, the 1.5-liter gasoline engine and a nickel metal-hydride battery pack supplied electricity to the Honda CR-Z’s 10kW electric motor.

Going into the 2013 model year, Honda replaced the nickel-hydride battery pack with a lithium-ion storage unit and the electric motor was upgraded to a 15kW piece. This, plus a few other tweaks boosted the system output to 130 horsepower and 140 ft-lbs of torque—for manual transmission equipped versions of the CR-Z. The torque figure is 127 ft-lbs for CR-Z models equipped with the continuously variable transmission.

Unlike most hybrids, Honda’s hybrid solution is configured such that the electric motor primarily provides propulsion in conjunction with the gasoline engine. It will not power the Honda CR-Z away from a stop on its own the way many other hybrid powertrains will do. However, in certain circumstances, the electric motor will cruise the car for short distances without the gasoline engine.

With that said, the Honda CR-Z is a bit more lively than your average hybrid because of the assist it gets from the electric motor and the involvement the manual transmission permits the driver. Standard features include automatic climate control, keyless entry, full power accessories, and a USB enabled six-speaker audio system.

So technically—no—the Honda CR-Z is not a sports car.

However, it’s currently the closet thing you’ll find to one in a two-seater with a hybrid powertrain.