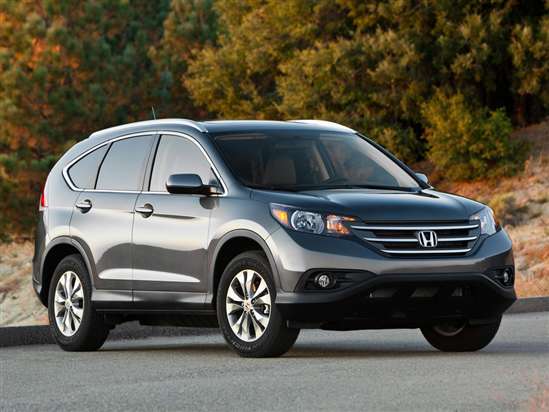 Now entering its third year since a complete redesign, the 2014 CR-V continues unchanged. It is likely that Honda will give its popular crossover SUV a thorough freshening for the 2015 model year.

There are three flavors of Honda CR-V available for the 2014 model year: LX, EX, and EX-L. The CR-V LX is a well-equipped model, giving buyers just about everything they might really need. Upgrade to EX trim, and the CR-V adds 17-inch aluminum wheels, fog lights, a power sunroof, a cargo cover and an upgraded audio system.

The top-of-the-line EX-L delivers leather upholstery, a power driver’s seat, heated front seats, heated exterior mirrors, dual-zone automatic climate control, and more. You’ll need to get the EX-L version to opt for a navigation system or a rear-seat entertainment system. Honda offers a choice between the two; you can’t get both.

A 185-horsepower, 2.4-liter 4-cylinder engine motivates the 2014 CR-V, paired with a 5-speed automatic transmission that sends the power to the front wheels. Those living in regions that experience inclement weather on a regular basis may be interested in the optional Real Time 4-wheel-drive system, which sends power to the CR-V’s rear wheels when the front wheels slip.

According to the EPA, the 2014 Honda CR-V will return 26 mpg in combined driving. Choose the optional 4WD system, and that number drops to 25 mpg.

The National Highway Traffic Safety Administration (NHTSA) gives the Honda CR-V an overall crash-test rating of 5 stars. The Insurance Institute for Highway Safety (IIHS) has not published official ratings for the 2014 CR-V as this review is written, but last year it received the top rating of “Good” in all assessments except for the tough new small overlap frontal-impact test, for which this SUV scored a “Marginal” rating.

Given that Honda is in the process of rolling out its Advanced Compatibility Engineering II (ACE II) body structure improvements, it is a good bet that one of the major items on the 2015 CR-V team’s to-do list is to upgrade this crossover with ACE II.

Every 2014 CR-V is equipped with Bluetooth connectivity, a USB port, Pandora Internet radio, and a multi-angle reversing camera. Options include a choice between a rear-seat entertainment system and a navigation system with voice recognition technology. No other tech-related features are available for the unusually simple CR-V.